23rd March is the day that Bhagat Singh, Rajguru and Sukhdev attained Martyrdom. One example of the resoluteness of Sardar Bhagat Singh and his associates remains inspirational even today.

Let Us Get Back into History

When the British Govt implemented an act to suppress freedom struggle, it gave the British Police a free hand to carry out arrests without any permissions. In order to protest against this act, Bhagat Singh and his friends carried out a plan to use low intensity bomb inside the assembly hall and at the same time ensure that there are no deaths. Immediately after the bombing, Bhagat Singh and his friends voluntarily surrendered and taken to trial. They were charged with attempt to murder and sentenced to 14 years life in 1929.

Further investigation by the Police led to discovery of other members, some of who turned into informants and helped police to connect Bhagat Singh with an alleged murder of a British Officer. Singh was again arrested and sent to another jail where he faced discrimination between British & Indian prisoners and that led to his protest in the form of huger strike against the discrimination.

In the meantime, the ongoing investigation of framing Bhagat Singh for the alleged murder of a British Officer in the past was hastened by the Viceroy, Irwin in 1930. Bhagat Singh, Rajguru & Sukhdev were sentenced to death and the execution date was fixed to 24th March 1931. The Congress and Gandhi made some attempts to save the lives but went in vain. Gandhi finally came to an agreement in the Gandhi-Irwin pact which gave the British the go-ahead with execution of Bhagat Singh and his friends. 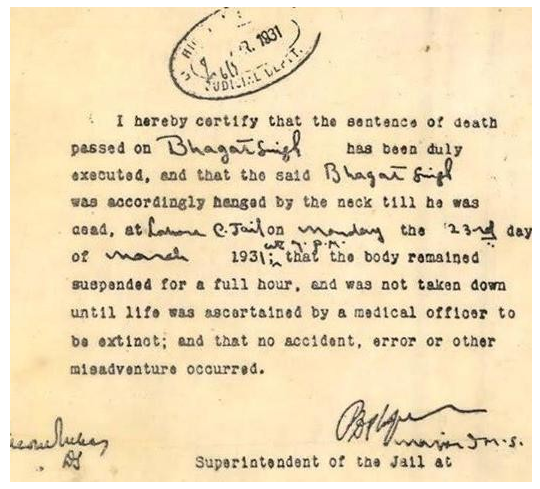 In order to disgrace Sardar Bhagat Singh and his associates, the then British Government informed them, “If you feel that you should be spared from being hanged, then you must apply for mercy.” The spirited answer to that advice, as given by Sardar Bhagat Singh, was as follows-

“The Government says that we should apply for mercy. But why should we do so? Are we thieves or dacoits or goondas? We are political prisoners in this war for freedom. The blood of complete freedom is circulating in every blood vessel of ours. Whatever bold action we did was for the sake of freedom alone ! We may not be worshippers of non-violence; our path may not be devoid of atrocities but is it not true that we are freedom-fighters? If the government has even a fraction of justice left within it, it has to treat us as political prisoners. We will never beg for mercy.

We do not intend to face this death sentence by saying ‘Do whatever you like but spare us from being hanged’. We dislike even climbing on the foot board meant for hanging. We are brave soldiers and true men ! Hence treat us like that by either shooting us with bullets or blast us with cannons. Who wants to face such a feeble sentence as hanging? We request you to respect this last wish of ours!”

“If the deaf are to hear, the sound has to be very loud. When we dropped the bomb, it was not our intention to kill anybody.”

As a freedom fighter, he was considered to be one of the most famous revolutionaries of the Bharatiya Independence movement. For this reason, he is often referred to as Martyr Bhagat Singh. At such a young age, if anyone was smiling just before being hanged to death, it was Martyr Bhagat Singh. His uncle, Sardar Ajit Singh as well as his father, were both great freedom fighters, so Bhagat Singh grew up in a patriotic atmosphere. 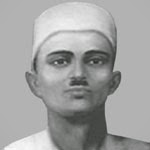 He was an active member of the HSRA, being one of its senior most leaders. He is known to have started study circles at the National College (Lahore), in order to delve into Bharat’s past as well as to scrutinise the finer aspects of the world’s revolutionary literature. Along with Bhagat Singh and others he started the ‘Naujawan Bharat Sabha’ at Lahore. The main aims of this organisation were to activate the youth for the freedom struggle, inculcate a rational scientific attitude, fight communalism and end the practice of untouchability.

He was born in an average middle-class Hindu Brahmin family at Khed in Pune District. He came to Varanasi at a very early age where he learnt Sanskrit and read the Hindu religious scriptures. He had a great admiration for Shivaji and his guerrilla tactics. At Varanasi, he came in contact with revolutionaries. He joined the movement and became an active member of the Hindustan Socialist Republican Army (HSRA). Rajguru had a fearless spirit and indomitable courage. The only object of his adoration and worship was his motherland, for whose liberation, he considered no sacrifice too great. He was a close associate of Chandrashekhar Azad and Bhagat Singh and his field of activity was UP and Punjab, with Kanpur, Agra and Lahore as his headquarters.
At the time of his martyrdom, Rajguru was hardly 23 years of age.

We pay obeisance to these invaluable sons of Bharat, who are still an inspiration to millions of Bharatiyas.
A salute to our martyrs for giving up their lives during freedom struggle so that  subsequent generations could live in peace & prosperity.