Access to all Banking Exams Courses
Subscribe Now
READ ON APP
Home Uncategorized Basic Political Structure in India and World
Facebook
Twitter
Google+
Pinterest
WhatsApp
May 12, 2015
Recently David Cameroon won the general elections in the recently contested elections in UK. we often get confused what the Conservative Party, and the Labour Party or The Liberal Democrats basically are? Read the following article to get a feel of the subject.
Who are
Liberals?
A liberal is
generally thought to be someone who supports large government with heavily
funded social programs and favors social engineering.
The
Democratic Party is considered by most Americans to be a liberal political
party. 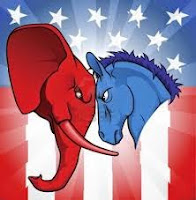 Who are
Conservatives?
A
conservative, on the other hand, is generally thought to be someone who
supports small government, does not support government funded social programs
and is against any form of social engineering.
The
Republican Party is considered by most Americans to be a conservative political
party.
Both parties
tend to be defined by their supposed interpretation of the Constitution. Of
course, both liberals and conservatives, Democrats and Republicans claim that
they observe and support the Constitution of the United States, but as we shall
see both the liberal and conservative agendas are diametrically opposed to the
Constitution. 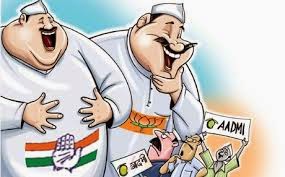 BJP was
founded in 1980. The ideology basically revolve around Hindutva. The aim of the
party is to enlighten and strengthen India on the lines of Hindu ideology.
The party
aims at establishing state the offers equal oppurtunity of liberty to every
creed, caste or sex.
Indian National
Congress –

This is one
of the prominent party in India along from BJP. INC is ideologically committed
to socialism, secularism and democracy.
The party
played a important role in the independence of India.
Communist
Parties –
The two
communist parties in India are Communist party of India (CPI) and Communist
party of India – Marxist (CPI-M). Communist party is one of the oldest in
India, was founded in 1925. The communists advocate the people to be
economically equal and the people should not be divided in to poor and rich.
Right wing
politics in India
Religious
and ethnic groups are considered right-wing. In India, Hindu nationalism is
sometimes considered a part of the Right. The Hindu nationalist movement has
attracted privileged groups fearing encroachment on their dominant positions.
Leftist in
India –
The Leftist
with his pro-subsidies, pro big government, minority-appeasing policies, human
rights concerns and weak-kneed approach to law and order is seen as passe. Communist
party of India (CPI) and Communist party of India – Marxist (CPI-M) are the
left parties in India
Analogies –