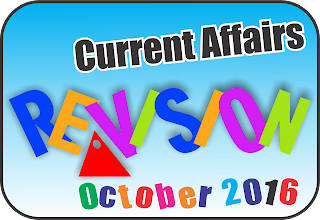 Q1. The Centre has given a year extension to ______________ as the Chairman of State Bank of India, first time in the history of the country’s largest lender.
Answer: Arundhati Bhattacharya

Q2. Which country has officially postponed the 8-nation SAARC summit 2016 , after 5 countries dropped out of it?
Answer: Pakistan


Q3. Every year 1st October is observed as International day of Older Persons (IDOP). This year (2016), the theme is……?
Answer: Take a Stand Against Ageism


Q7. Which state has become the first state in the country to implement Direct Benefit Transfer in Kerosene?
Answer: Jharkhand


Q8.  The BRICS Business Council will also be simultaneously held in New Delhi on October 13-14, while the first BRICS trade fair, focussing on 20 key sectors, will be hosted in………….?
Answer: Goa


Q10. The Cabinet Committee on Economic Affairs, CCEA gave nod to acquisition of how much per cent stake in Russian oil company JSC Vankorneft, by ONGC Videsh Limited, OVL for 930 million dollars?
Answer: 11 per cent


Q11. Which country and India signed three agreements, including two in the area of skill development, following delegation-level talks headed by Prime Minister Narendra Modi and it’s Premier Lee Hsien Loong, who is on a visit to India?
Answer: Singapore


Q13. India’s latest communication satellite ____________ was successfully launched early by a heavy duty rocket of Arianespace from the spaceport of Kourou in French Guiana.
Answer: GSAT-18


Q14. Which country and India have shared their concerns at the spread of cross-border terrorism in the region recently?
Answer: Sri Lanka


Q15. Antonio Guterres is poised to become the next Secretary General of the United Nations after the Security Council declared him to be the unanimous choice in the sixth straw poll. He was the former Prime Minister of which country?
Answer: Portugal