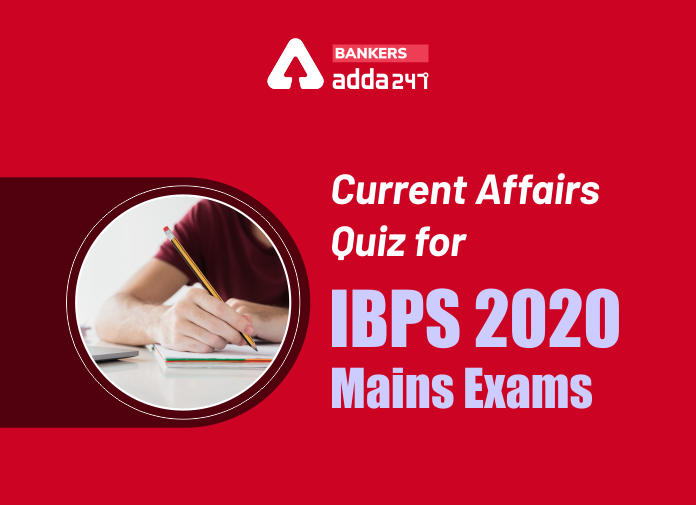 The Current Affairs section constitutes a major part of General Awareness section in a competitive examination and plays an instrumental role. To supplement your preparation for the General Awareness Section of the upcoming exams like IBPS Mains, SBI Clerk Mains, RBI Assistant Mains and SEBI Grade A Prelims, we are providing you Current Affairs Quiz of 20th November 2020 covering the following topics Headlines: Moldova, Gau Cabinet, CASA campaign, Karnataka Bank, FIFA U17.

Q2. Mridula Sinha who has passed away recently was the former Governor of which state?
(a) Haryana
(b) Bihar
(c) Goa
(d) Maharashtra
(e) Gujarat

Q3. Which state has announced to launch a Gau Cabinet for the welfare of cows in the state?
(a) Uttar Pradesh
(b) Haryana
(c) Punjab
(d) Rajasthan
(e) Madhya Pradesh

Q4. The Reciprocal Access Agreement (RAA) is a defence deal signed between which countries to counter China’s growing influence in the South China Sea?
(a) Australia and India
(b) India and US
(c) Japan and Australia
(d) US and Australia
(e) US and Japan

Q7. What is the theme of World Toilet Day (WTD) 2020?
(a) Toilets and jobs
(b) Sustainable sanitation and climate change
(c) When nature calls
(d) Leaving no one behind
(e) Wastewater

Q8. What is the theme of World COPD Day 2020?
(a) Living Well with COPD-Everybody, Everywhere
(b) The Many Faces of COPD
(c) NEVER TOO EARLY, NEVER TOO LATE
(d) All Together to End COPD
(e) Breathless not Helpless!

S3. Ans.(e)
Sol. TheMadhya Pradesh government, led by Chief Minister Shivraj Singh Chouhan, has decided to set up a ‘Gau Cabinet’ for the protection, conservation and promotion of cows in the state.

S4. Ans.(c)
Sol. Japan and Australia have signed a ‘landmark’ defence pact in a bid to counter China’s growing influence in the South China Sea and over the Pacific island nations. The deal is called Reciprocal Access Agreement (RAA)

S5. Ans.(b)
Sol. Indian cricketer Sudeep Tyagi, has announced his retirement from all forms of the game.

S9. Ans.(e)
Sol. The 2021 U-17 Women’s World Cup, which was scheduled to be held in India, has been cancelled due to the Coronavirus pandemic. It has also been decided that India will host the 2022 edition of the World Cup.

S12. Ans.(d)
Sol. Indian supercomputer, Param Siddhi has achieved 63rd rank in the list of 500 most powerful supercomputers in the world.

S13. Ans.(b)
Sol. Department of Investment and Public Asset Management (DIPAM) has signed an agreement with the World Bank, to provide advisory services to DIPAM for asset monetization.