i. US Secretary of State John Kerry headed for India to attend the Vibrant Gujarat Summit during which he will address investors to boost economic ties and meet Prime Minister Narendra Modi to discuss a broad range of bilateral and global issues, including climate change.
ii. “The Secretary would be emphasising the importance and future potential of our economic partnership with India, State Department Spokesperson Jen Psaki told PTI.
2. Sindhushree Khullar appointed as the Chief Executive Officer of NITI Aayog
i. Senior bureaucrat Sindhushree Khullar appointed as the Chief Executive Officer (CEO) of National Institution for Transforming India (NITI) Aayog with effect from 1 January 2015. She will serve the position for one year.
ii. She is 1975-batch officer of the Indian Administrative Service’s (IAS) Union Territories cadre. In March 2013, she was appointed as Secretary of the Planning Commission on contract basis for two years.
iii. Noted Economist Arvind Panagariya was appointed as the Vice Chairman of the NITI Aayog. Economist Bibek Debroy and former DRDO chief V K Saraswat were appointed as full-time members of NITI Aayog.
3. Rajiv Mehta appointed new DGP of Meghalaya
i. Senior IPS officer Rajiv Mehta has been appointed as the new Director General of Police in Meghalaya.
ii. He is currently serving as the Director General of Narcotics Control Bureau (NCB) in Delhi.
iii. Mr. Mehta replaces P.J.P. Hanaman who retired on December 31 and will take charge from acting DGP S.K. Jain.
4. Sirisena’s first overseas visit will be to India
i. Sri Lanka’s newly-elected President Maithripala Sirisena will make his first State visit overseas to India.

ii. ‘Mr. Modi invited our President to come to India first. He proposes to go next month,” said Rajitha Senaratne, senior politician and spokesman of Mr. Sirisena.
5. UN to Host New Libya Peace Talks in Geneva Next Week
i. The United Nations said that it would host a new round of peace talks between Libya’s warring factions in Geneva next week.
ii. The UN Support Mission in Libya (UNSMIL) said in a statement that its head “Bernardino Leon” had proposed a freeze in military operations for a few days “in order to create a conducive environment for the dialogue”.
6. Vice President Mohammad Hamid Ansari presented Pravasi Bharatiya Samman Awards 2015
i. Mohammad Hamid Ansari on 9 January 2015 presented the Pravasi Bharatiya Samman Awards 2015 to sixteen personalities. The awards were presented during the occasion of Pravasi Bhartiya Divas at Gandhinagar, Gujarat.
ii. Apart from fifteen awardees, Senator Liza Singh from Australia also received the award as he could not accept the award in 2014 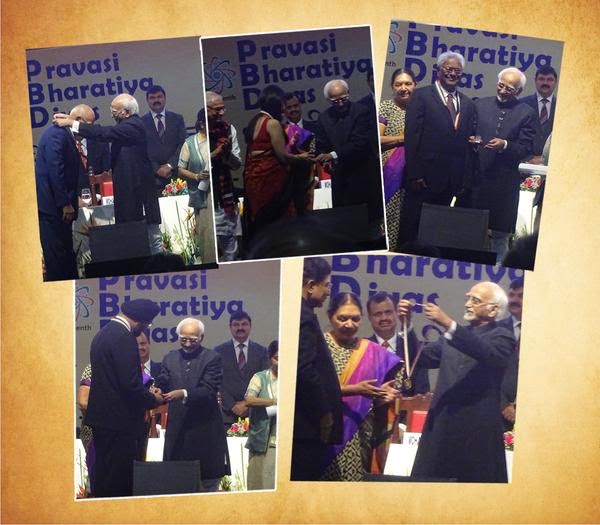 NOTE: About the Pravasi Bharatiya Samman Awards
a. The Pravasi Bharatiya Samman Award was constituted by the Union Ministry of Overseas Indian Affairs to honour the contributions of Non-Resident Indians in their respective profession. The award is given by the President of India.
b. Organized annually since 2003, the award is presented to a Non-Resident Indian (NRI), Person of Indian Origin or an organization established and run by the NRIs.


7. SpaceX Launches for NASA, Aims for Rocket Landing at Sea
i. A SpaceX rocket has blasted off with supplies for the International Space Station.
ii. The unmanned Falcon rocket soared into a clear pre-dawn sky at Cape Canaveral, Florid
iii. The primary mission for SpaceX is delivering more than 5,000 pounds (2,300 kilograms) of food, experiments and other items ordered up by NASA.