Mr. Modi tweeted, His bravery, courage & patriotic zeal inspire us. On his birth anniversary, I bow to the proud son of India, Netaji Subhas Chandra Bose.
iii. It has been maintained that Bose died in an air crash in Taiwan in 1945. However, the Mukherjee Commission had rejected the opinion that he had died in a plane crash at Taihoku airport in Taiwan on August 18, 1945.
2. RBI directs banks to display all loan costs
i. Reserve Bank of India (RBI) made it compulsory for banks to set out every possible cost in respect of the loan in a fact sheet at the processing stage.
ii. Banks will also have to publish the ‘annual percentage rate’ representing the total cost of credit to an individual borrower.

iii. Besides, they will have to display on their website the interest rate range for various contracted loans for the past quarter for different categories of advances.

iv. The fact sheet drafted by the central bank requires lenders to spell out the interest rate, the spread above the benchmark rate, date of reset of floating rates, mode of communication of interest rate changes, all fees payable, refundable fees, charges for conversion from floating to fixed rate loan and penalty for delayed payments.
v. The significance of this fact sheet is that it will make it possible for borrowers to compare loans from two lenders.
3. Supreme Court’s decision on IPL Spot fixing
i. The Supreme Court pronounced its much-awaited verdict on N Srinivasan’s conflict of interest case, saying that BCCI functions are amenable to judicial review. 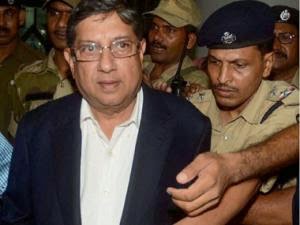 ii. He also sought to modernise the ultraconservative Muslim kingdom with incremental but significant reforms, including nudging open greater opportunities for women
iii. Prince Salman bin Abdulaziz became king and Prince Muqrin was declared Crown Prince, another Royal Court statement said.
5. Bomb blast at Ara civil court in Bihar
i. At least two persons, including a woman, were killed and several others injured in a bomb blast inside the premises of the civil court at Ara in Bihar.
ii. Police officials said that a woman who was killed in the blast was carrying the crude bomb which suddenly went off inside the court premises killing a policeman and injuring several others.
6. South Korean president nominates new prime minister
i. South Korean President Park Geun-hye has nominated ruling party lawmaker Lee Wan Koo to replace Prime Minister Chung Hong-won .
ii. Chung offered to resign nearly 10 months before, over a ferry disaster that killed more than 300 people in April last year.
iii. Park decided to retain Chung in June after two possible replacements for the job abandoned their nominations because of questions over past behavior.
7. Kerala to get first International Institute of Music
i. Kerala Culture Minister K C Joseph on 22 January 2015 announced setting up of the International Institute of Music in Kerala. It will be the first international institute in India that is dedicated to music. ii. A Trust headed by Sarod Maestro Ustad Amjad Ali Khan has been entrusted with the responsibility to set up the Institute.
iii. The government will provide only land and all other infrastructure facilities will be built by a trust managed by Khan’s family.
iv. Kerala Government also identified the land for setting up the school in Thiruvananthapuram or Kochi or Kozhikode.