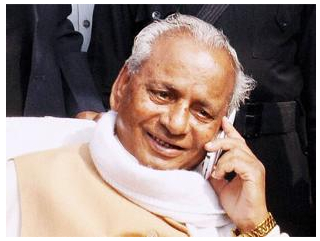 i. Rajasthan Governor Kalyan Singh was today sworn in as the Himachal Pradesh Governor
ii. He was administered oath of office by Himachal Pradesh High Court Chief Justice Mansoor Ahmed Mir
iii. Singh has been given an additional charge of Himachal Pradesh after Urmila Singh, who completed the full five year term as HP Governor on January 24.
2. Hockey Olympian Jaswant Singh Rajput passes away
i. Two-time gold medal winning hockey Olympian Jaswant Singh Rajput passed away on 28th January 2015 following a prolonged illness
ii. The former India centre-half was part of the gold medal winning teams in 1948 London and 1952 Helsinki Olympics.
iii. With the likes of Leslie Claudius, Keshav Dutt and Meldric Daluz, Jaswant had formed a lethal foursome and was part of a golden era in Bengal hockey with as many as seven players in the Helsinki-bound side.
3. Arundhathi Subramaniam won Khushwant Singh Memorial Prize for Poetry

i. Poet Arundhathi Subramaniam won the inaugural Khushwant Singh Memorial Prize for Poetry for her work When God is a Traveller.
ii. The winner was announced at a prize ceremony at the ZEE Jaipur Literature Festival, attended by over 2,500 poetry lovers.
iii. The award, carrying a cash prize of Rs. 2 lakh, was established earlier this year by Suhel Seth in memory of the late Khushwant Singh and is open to Indian poets writing in English or Indian language translation.

5. Gujarat Technological University launches e-Raksha centre to fight cybercrime
i. Gujarat Technological University (GTU) has launched e-Raksha Research Centre to curb rising menace of cybercrimes.
ii. This research Centre will provide solution for issues related to cyber security by encouraging research and enhance capability in this field.
Key facts e-Raksha Research Centre
6. Ancient star with five Earth size planets discovered
i. After analysing over four years of data from NASA’s Kepler spacecraft, a team of astronomers has discovered a star that is 11.2 billion years old and has at least five Earth-size planets.
ii. The findings show that Earth-size planets have formed throughout most of the universe’s 13.8-billion-year history, leaving open the possibility for the existence of ancient life in the galaxy.
Key findings

7. K Durga Prasad appointed as the Special DG of CRPF
i. K Durga Prasad hte new appointed Special Director General (DG) of the Central Reserve Police Force (CRPF) is an IPS officer of 1981 batch from Andhra Pradesh cadre will be in office for next three years or till further orders are given.
ii. Earlier, Prasad served as the director of the Special Protection Group (SPG). SPG provides security to the Prime Minister, former Prime Ministers and their family members.

Bradman young cricketer of the year award: It was instituted in 1990. It is bestowed annually by Cricket Australia to best player under the age of 24. The recipient is presented with a bat personally signed by Sir Donald Bradman (He had signed 100 bats in 1989 for this award)