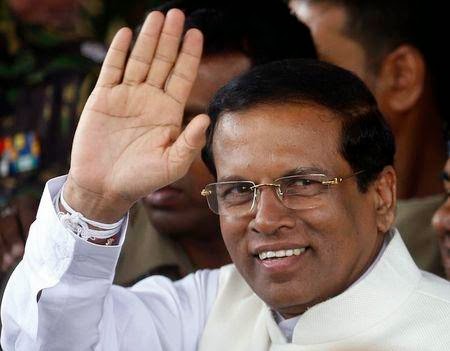 ii. Official results showed Maithripala Sirisena, a former ally of the incumbent, had won 51.3% of the vote.
iii. Sirisena met the next Prime Minister Ranil Vickramaisnghe at the Independence Square, Colombo to discuss the future course of action.
iv. Less than two months ago, when the president called snap elections, this outcome was unimaginable. There was no big opposition candidate in sight.

v. Then suddenly Mr Sirisena, then the health minister, switched sides, propped up by heavyweight politicians and later supported by many minority groups.

2. SEBI proposes e-IPO norms(Electronic-Initial public offer)
i. Investors can bid for shares through Internet and eventually on mobiles, while already listed PSUs will be provided a ‘fast-track’ route for share sales to meet the disinvestment targets.
ii. For already listed companies ,Sebi has proposed a fast-track route for raising of funds through FPOs (Follow-on Public Offers) or Rights Offers (where funds can be raised from existing shareholders).

iii. The fast-track route of raising capital has been proposed for companies having public shareholding market valuation of as low as Rs 250 crore, as against Rs 3,000 crore currently.
iv. Currently, applications for IPOs can be uploaded on a real-time basis only through ASBA (Application Supported by Blocked Amount). Only self-certified syndicate banks are authorised to manage it.
v. With regard to fast-track issuances of Follow on Public Offer (FPO) and rights issue, Sebi proposed that route can be extended to companies having an average market capitalisation of between Rs 250 crore to Rs 3,000 crore.
3. Qantas rated as ‘World’s Safest Airline for 2015′
i. AirlineRatings.com, safety and product rating website, has announced its top ten safest airlines and top ten safest low cost airlines for 2015 from the 449 it monitors.

ii. Top of the list again is Qantas which has a fatality free record in the jet era.
iii. Making up the remainder of the top ten in alphabetical order are: Air New Zealand, Cathay Pacific Airways, British Airways, Emirates, Etihad Airways, EVA Air, Finnair, Lufthansa and Singapore Airlines.
iv. Over its 94-year history Qantas has amassed an extraordinary record of firsts in safety and operations and is now accepted as the world’s most experienced airline.
4. Google CEO Larry Page emerges as ‘business person of the year’ for 2014
i. Larry Page, Google’s CEO has emerged as the ‘business person of the year’ for 2014, edging past the likes of Alibaba co-founder Jack Ma and Facebook CEO Mark Zuckerberg, according to Fortune magazine.

ii. Amazon’s Jeff Bezos, who led Fortune list in 2012, failed to make in to the top 20 list.
iii. The list is based on various parameters like financial results of the company including 12-month and three year growth in profits and revenues, company’s stock performance and total shareholder returns over the same periods.
5. KKR partners GIC to set up India real estate lending company
i. KKR (Kohlberg Kravis Roberts & Co), American multinational private equity firm, had set up a non-banking financial company in the country for lending to the real estate sector, with an investment from Singapore sovereign wealth fund GIC.

ii. Mr. Vohra sent a report to the President after Omar Abdullah asked him to relieve him as caretaker Chief Minister.
iii. More than a fortnight after the results of the Assembly elections have been out, neither PDP which emerged as the single largest party with 28 seats nor BJP with 25 could get the magic figure of 44 to stake claim to form a government in the 87-member House. NC has 15 MLAs while the Congress 12.
7. Vaccine Raksha Blu for bluetongue disease launched
i. To counter the deadly bluetongue disease, Raksha Blu vaccine was launched on 8 January 2015 by Gachibowli facility of Indian Immunologicals Limited (IIL) in Hyderabad, Telangana.
ii. The vaccine was launched with an aim to minimise the economic loss of the animal farming community that occurs due to bluetongue disease.
iii. The vaccine has been developed to protect the animals against five strains of the ‘bluetongue’ virus prevalent in the country. Per dose of the vaccine will be available for farmers at an expense of 5 rupees.
NOTE: The vaccine is the result of collaborative efforts of IIL, TANUVAS (Tamil Nadu University of Veterinary and Animal Sciences) and ICAR (Indian Council of Agricultural Research). The vaccine was developed in three years.
8. Tatas’ Vistara starts flying
i. Marking Tatas’ re-entry into the Indian aviation space after over six decades, new airline Vistara on Friday flew its first flight, and said its aim will be to “do it right” without making a big splash.
ii. Tatas hold a majority 51 per cent stake in Vistara — a joint venture with Singapore Airlines, which holds the remaining 49 per cent.

iii. The first Vistara flight flew from Delhi to Mumbai today — over six decades after Tata Airlines was rechristened as Air India, and eventually nationalised in 1950s.