Skip to content
1.    India, Nepal ink 3 pacts; work on Pancheshwar dam to
start soon
i. Prime Minister Narendra Modi
on Sunday met his Nepalese counterpart Sushil Koirala during which the two
sides inked three agreements, including one on the 5,600 MW Pancheshwar
Multipurpose Project that will pave the way to start the stalled project.
ii. Modi, who arrived here
this morning on his maiden official visit to Nepal, met Koirala at Singha
Durbar Secretariat.

iii. The two leaders discussed
various issues including Nepal’s peace process and constitution-drafting
process as well as economic issues. They also discussed various facets of
mutual relations and issues of common interest.
iv. Nepal and India has also
signed three separate Memorandum of Understandings during the bilateral talks
held between the delegations led Modi and Koirala.
v. Under the first agreement,
India would provide Rs 65 million to procure and distribute iodised salt in the
rural areas of Nepal. This would be the extension of the ongoing goiter control
project being implemented under India’s grant.
vi. The two governments also
signed MOU regarding the amendment of Terms of Reference (ToR) of the
Pancheshwar Multipurpose Project on the Mahakali river.
vii. Under the agreement, the
two countries have agreed to move forward works relating to Pancheshwar
Development Authority by declaring Pancheshwar authority regulation.
viii. The project falls under the
integrated treaty on Mahakali River, bordering both Nepal and India, which was
signed in 1996. It could not be developed earlier as the two countries could
not decide on the terms of reference.
2.    PM offers $1 bn credit to Nepal
i. Prime Minister Narendra
Modi who is on an official visit to Nepal offered a line of $1 billion credit
to the Himalayan nation, a minister said Sunday.
ii. The fund is for road and
hydro-power projects, Nepalese Finance Minister Ram Saran Mahat briefed the
media.
iii. Modi is on a two-day visit
to Nepal which is expected to strengthen bilateral and regional ties between
the two neighbouring countries.
3.    English marks in CSAT-II will not be included for
gradation: govt 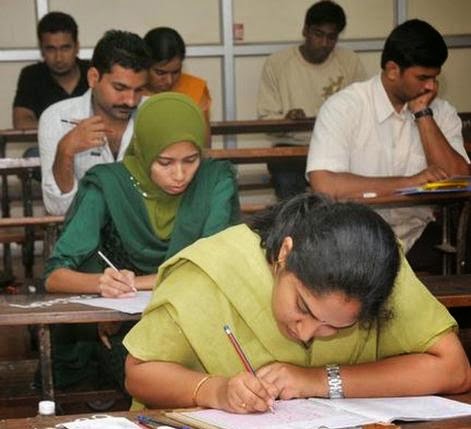 i. English
marks in CSAT-II will not be included for gradation or merit and 2011
candidates may get a second chance to appear for the test next year, the
government announced in the Lok Sabha on Monday seeking to defuse the UPSC row
that has seen the aspirants on the warpath.
ii. Government is of the opinion that in
the Civil Services Preliminary examination, Paper-II, the marks of the question
section on ‘English Language comprehension skills’ should not be included for
gradation or merit,” Minister of State for Personnel Jitendra Singh said
seeking to mollify the agitating candidates.
iii. In a brief statement Mr. Singh said,
“Candidates, who appeared in Civil Services Examination 2011, may be given one
more attempt in 2015.”
iv. Parliament has witnessed repeated
uproar and several adjournments in the past few days over the issue.
v. There are two compulsory papers of
200 marks each in the preliminary examination. These papers are also known as
CSAT-I and CSAT-II.
vi. The CSAT-II paper carries questions
on comprehension, inter-personal skills including communication skills, logical
reasoning and analytical ability, decision-making and problem- solving, general
mental ability, basic numeracy, and English language comprehension skills (of
Class X level).
vii. Students have been objecting to the
level of aptitude and English language questions being asked in the examination
claiming they are much above the standard prescribed for the examination.
viii. The civil services examination is
conducted by the Union Public Service Commission (UPSC) in three stages —
preliminary, main, and interview — to choose candidates for Indian
Administrative Service (IAS), Indian Foreign Service (IFS) and Indian Police
Service (IPS), among others.
4.    Ramon Magsaysay Award 2014 announced
i. The prestigious Ramon
Magsaysay Awards for year 2014 was announced.. The list of awardees included
six winners among five individuals and one organization from Pakistan.
The 2014 Awardees are:
i.  Hu
Shuli: She is a
Chinese investigative journalist whose work has led to the ouster of corrupt
officials. She is the founder and former editor of Caijing a business magazine
famed for its groundbreaking investigative reporting that has had a profound
impact on China.
ii. Saur Marlina Manurung: She is being recognized for her
ennobling passion to protect and improve the lives of Indonesia’s forest
people, and her energizing leadership of volunteers in SOKOLA’s customized
education program. She put up a Jungle School program for children of
Indonesia’s Orang Rimba, or forest people.
iii.  Omara
Khan Masoudi from Afghanistan:  He is being recognized for
his courage, labor, and leadership in protecting Afghan cultural heritage.
Masoudi was awarded for his courage in protecting Afghan cultural heritage.
iv. The Citizens Foundation from Pakistan:
It is a non-profit organisation (NGO) in Pakistan founded by six business
leaders. It was recognized for building 1000 schools over hundreds of cities
and towns in the country with the world’s second highest number of children who
are out of school.
v.  Wang Canfa from China:  Wang Canfa founded the Center for
Legal Assistance to Pollution Victims, which has offered free legal services to
thousands of people and provided environmental law training to lawyers and
others.
vi. Randy Halasan for Emergent Leadership
from the Philippines:  He was chosen for the award for
serving the indigenous Matigsalug tribe. He put in huge efforts in teaching the
children of the Matigsalug tribe in one of the remotest mountain villages in
Mindanao.

About Ramon Magsaysay Awards
i. The award was established in
1957. The Ramon Magsaysay Award is Asia’s highest honor and is widely regarded
as the region’s equivalent of the Nobel Prize.
ii. It celebrates the
memory and leadership example of the third Philippine president after whom the
award is named.
iii. The award is given
every year to individuals or organizations in Asia who manifest the same
selfless service that ruled the life of the late and beloved Filipino leader.
5.    2014 Glasgow Commonwealth Games concluded; India
finished 5th with 64 medals
i. 20th Commonwealth
Games (CWG) 2014 concluded at Hampden Park stadium in Glasgow, Scotland on 3
August 2014 at.
ii. The game that saw 17
sports in a competition of 11 days was held from 23 July to 3 August 2014.
iii. The
Glasgow 2014 CWG was declared closed in presence of British Prime Minister
David Cameron, Prince Edward, the Earl of Wessex and vice patron of
Commonwealth Games Federation. The 21st Commonwealth Games will be
held in Gold Coast in Australia. 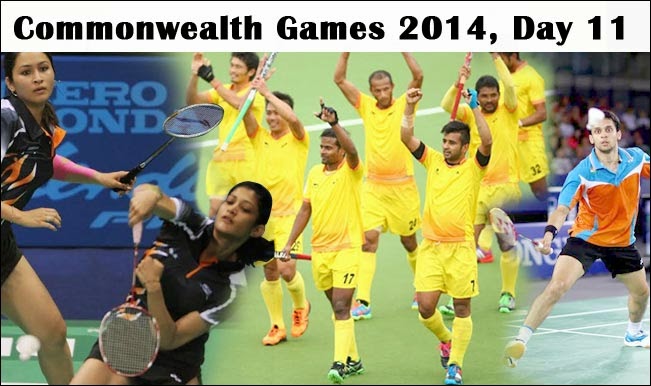 Note: England topped
the medals tally while Australia got the second position. Canada was third
followed by Scotland.
Medal Standings

i. Parupalli Kashyap etched his name firmly in the
history books by becoming the first Indian male shuttler in 32 years to win a
gold medal at the Commonwealth Games, but women’s doubles pair of Jwala Gutta
and Ashwini Ponnappa had to settle for a silver on Sunday.
ii. A bronze-medallist at the Delhi Games,
Kashyap rose to the occasion and played a sensational game of nerves to eke out
a breath-taking 21-14 11-21 21-19 triumph against Derek Wong of Singapore in
the final showdown which lasted for over an hour.
iii. Kashyap joined badminton legend
Prakash Padukone and late Syed Modi, who had won the title in the past. While
Padukone had won the men’s singles gold medal at the 1978 Commonwealth Games in
Canada, Modi retained it four years later.
iv. It
turned out to be a red letter day for World No. 22 Kashyap who bagged the
biggest title of his career. He reached the quarterfinals of the London
Olympics and won the Syed Modi Grand Prix Gold in 2012.
8.
India lose to Australia 0-4, settle for silver in men’s
hockey

i. India men’s hockey team lost 0-4 to
Australia in the final and had to be content with a silver medal on the final
day of the 20th Commonwealth Games at the Glasgow National Hockey Centre  on Sunday.
ii. Two goals on either side of the break
gave the Australians their fifth consecutive Commonwealth gold.
iii. Drag flicker Chris Ciriello scored a
hat-trick of penalty corner goals while Eddie Ockenden chipped in with one.
iv. Australia had beaten India 8-0 in the
final in Delhi four years ago, resulting in India’s only previous hockey medal,
a silver, in the Commonwealth Games.
9.
Jwala-Ashwini settle for silver 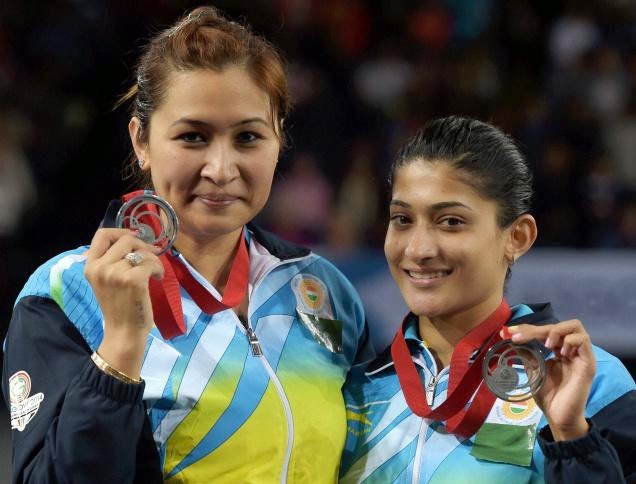 i. Jawala Gutta and Ashwini Ponnappa
failed to recreate the same magic as their title defence lay in tatters after a
17-21 21-23 defeat against World No. 18 Malaysian combo of Vivian Kah Mun Hoo
and Khe Wei Woon in the 41-minute summit clash at the Emirates Arena in Glasgow
on Sunday.
ii. Nonetheless, the silver medal is yet
another feather in the caps of Jwala and Ashwini who had clinched the 2011
World Championship bronze and also bagged the bronze at the Asian Badminton
Championship in April this year.
10.  WFI suspends tainted referee Virender Malik
i. Wrestling
Federation of India on Monday suspended referee Virender Malik, who was
detained on charges of alleged sexual assault in Glasgow during the
recently-concluded Commonwealth Games, with immediate effect.
ii. The president of WFI, Brij Bhushan
Sharan Singh took the decision to suspend the tainted official but the
Federation would wait for details from Scotland police before making his ban
permanent.
iii. “The news of Malik’s arrest came
and since it was a Sunday and the office was close, the decision to suspend
Malik was taken on Monday by the WFI president. The first thing the President
did today was issue a suspension against Malik with immediate effect,”
Assistant secretary of WFI, Vinod Tomar told PTI.