One of our ardent Reader “Mr. Cool” has shared the below given informative post with us. We hope that you all will like it.
1. Bhutan – 16 – 17 June

* Highlights:
Modi made his first foreign visit to Bhutan following an invitation by
* King Jigme Khesar Namgyel Wangchuck and Tobgay.
* The visit was called by the media as a “charm offensive”
1. India and Bhutan reiterated their commitment to achieving the 10,000 MW target in hydropower cooperation 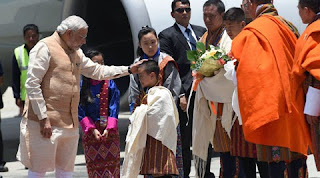 2. Modi inaugurated one of India’s assistance projects – the building of the Supreme Court of Bhutan and laid foundation stone of the 600MW Kholongchu Hydro-electric .
3. India also announced exemption of Bhutan from any ban on export of milk powder, wheat, edible oil, pulses and non-basmati rice.

4. The two sides recalled the free trade arrangement between them and the expanding bilateral trade and its importance in further cementing their friendship.
5. Prime Minister Narendra Modi also mooted the idea of an annual hill sports festival with India’s northeastern states along with Bhutan and Nepal.
6. Modi announced doubling of scholarships being provided to Bhutanese students in India which will now be worth Rs 2 crore.
7. India will also assist Bhutan set up a digital library which will provide access to Bhutanese youth to two million books and periodicals.
8. Both India-Bhutan reaffirmed their commitment to extensive development cooperation and discussed ways to further enhance economic ties.
* Key persons –Sushma Swaraj,  National Security Adviser Ajit Doval & Foreign Secretary Sujatha Singh.

In July 2014, he visited Brazil for his first multilateral visit, the 6th BRICS summit was held at the north-eastern beach city of Fortaleza. 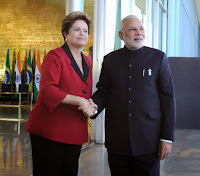 * In the Fortaleza summit the group have agreed to establish a financial institution rivaling the western dominated World Bank and IMF.
* The bank would be named the New Development Bank as suggested by the Indian side but Modi govt failed to bag the bank’s headquarter for New Delhi, which would be located in Shanghai, China.
* Later the BRICS leader also attended an event in Brasilia where they met the UNASUR heads of government.
* At the same time, the Ministry of External Affairs added Spanish to its list of available languages.
* Key persons –BRICS countries prime ministers
3. Nepal – 3 – 4 August

* Highlights:
Modi arrived for a two-day visit to Nepal on 3 August. The last visit of an Indian prime minister to Nepal was 17 years ago in 1997 by I. K. Gujral,
1. India-funded hydroelectricity projects in Nepal and other infrastructure projects in Nepal
2. Modi became the first foreign leader to address the Parliament of Nepal. 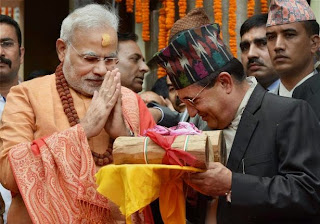 3. He did puja at the fifth century Pashupatinath temple
4. Modi announced a credit assistance programme of US$1 billion to Nepal
5.* HIT policy:
which stands for Highways, Information Technology and Transmission.
* key persons –Nepal Prime Minister GP Koirala
* Note1: The last visit of an Indian prime minister to Nepal was 17 years ago in 1997 by I. K. Gujral.
* Note2: 18th SAARC summit-katmandu-His first ever SAARC summit.
4. Japan – 30 August – 3 September 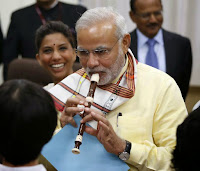 2. Pledging financial support for building infrastructure in India.
3. Sticking to his ‘Make in India’ slogan
4. Modi gave an open invitation to Japanese companies to consider India as a ‘competitive low-cost manufacturing hub
5. PM Modi’s 3D mantra–Democracy, Demography and Demand
6. Bullet trains: With Japan committing to fund bullet trains, the dream of running high-speed trains on Indian tracks is now a step closer.
7. Special Strategic Global Partnership’: Japan and India have upgraded their partnership to the level of ‘Special Strategic and Global Partnership’ with the signing of a defence pact for regional stability and Tokyo’s decision to double FDI in India.
8. Civil nuclear deal remains elusive – Despite last-minute negotiations, the two sides could not narrow down differences over Tokyo’s insistence for a tougher safe-guard regime and “no nuclear test” clause in the bilateral agreement.
5. United States: 26 – 30 September

* Highlights:
1. Modi delivered his maiden speech in the sixty-ninth session of the United Nations General Assembly on 27 September 2014,
2. India’s long standing demand of a permanent membership in Security Council
3. He had also argued why UN should serve as G-All for global governance instead of several parallel sub-groupings like G7, G20 etc. 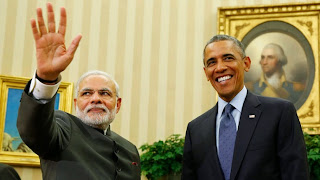 4. Modi-Obama joint statement-cooperation in various fields including defence, intelligence, counter-terrorism, Afghanistan, space exploration and science
5. Madison Square Garden pitch-3D Mantra, skill development, talent pool and India’s bright economic prospects.
6. Comprehensive on International Terrorism’ by the UN and offered India’s pro-active role in it citing India as a victim of terrorism for decades.
7. Demand Sharif has made in his address at the UNGA on 26 September, on Kashmir related mater he stated that his govt is ready for ‘bilateral talk’
8. Modi commented briefly on climate change and use of clean energy, in this regards he also asked world leaders and UN officials for observing Yoga Day
9. Modi fasted during a White House dinner in his honor.
10. Smart city assistance — AJMER, ALLAHABAD, VISIKAPATNAM–CISCO
* key persons– obama , ban-ki-moon
6. Myanmar – 11–13 November 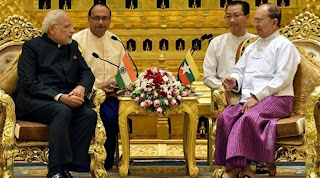 4. The summit also rejected any linkage between religion and terrorism.
5. They have also said that it should be ensured that cyberspace and space remain a source of connectivity and prosperity and not new threats of conflicts.
* key persons– ASEAN COUNTRIES PM

1. First time,Australian and Indian Prime Ministers have made reciprocal visits in the same year.

2. The Prime Minister of India, Narendra Modi, paid an official visit to Australia from 16-18 November 2014, following the G-20 Summit.
3. Priority areas such as resources, education, skills, agriculture, infrastructure, investments, financial services and health
4. CECA_Comprehensive Economic Cooperation Agreement be brought to an early conclusion to realise the potential of commercial relations.
5. Australian investment in cold chain storage, energy, infrastructure and other sectors can do for the Indian economy. 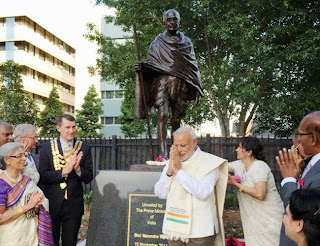 6. India will hold a Make in India event in Australia in 2015 and organise shows in gems and jewellery, engineering and pharmaceuticals to showcase India’s manufacturing capabilities.

* Highlights:
1. In more than 33 years Modi became the first Indian head of government to visit Fiji after Indira Gandhi’s visit in 1981.
2. There he also attended a ‘Forum for India-Pacific Island cooperation’ along with leaders from all 14 Pacific islands nations.
* key persons–Frank Bainimarama–PM 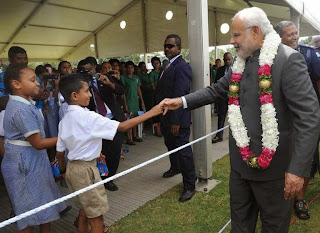