Skip to content
Holi is a spring festival also known as the festival of colours or the festival of love. It is an ancient Hindu religious festival which has become popular with non-Hindus in many parts of South Asia, as well as people of other communities outside Asia.

Holi festival may be celebrated with various names and people of different states might be following different traditions. But, what makes Holi so unique and special is the spirit of it which remains the same throughout the country and even across the globe, wherever it is celebrated.
Holi is celebrated with enthusiasm and gaiety on the full moon day in the month of “Phalgun” which is the month of March as per the Gregorian calendar.
Holi celebrations start with a “Holika” bonfire on the night before Holi where people gather, sing and dance. The next morning is a free-for-all carnival of colours, where participants play, chase and colour each other with dry powder and coloured water, with some carrying water guns and coloured water-filled balloons for their water fight.
Heaps of various hues of Gulal and Abeer can be seen on the roadside days before the festival. Pichkaris in innovative and modern design too come up every year to lure the children who wish to collect them as Holi memorabilia and of course, to drench everybody in the town. This is why Holi is given the name “Festival of Colours.”

History of Holi:
Holi was originally a festival to celebrate good harvests and fertility of the land, but is now a symbolic commemoration of a legend from Hindu Mythology.
The story is that there was once a king who resented his son, “Prince Prahlada”, worshipping Lord Vishnu. He tries to murder the prince on several occasions but fails each time.
Finally, the king’s sister Holika who is said to be immune to burning, sits with the boy inside a fire. However, the prince emerges unhurt, while his aunt burns in the fire and dies.
Holi remembers this event, and huge bonfires are burnt on the eve of Holi as a symbolic representation.

The festival is also associated with the eternal love of Krishna and Radha, and hence, Holi is spread over 16 days in Vrindavan as well as Mathura – the two cities with which Lord Krishna shared a deep affiliation.

In Braj region around Mathura, in north India, the festivities may last more than week. The rituals go beyond playing with colours, and include a day where men go around with shields and women have the right to playfully beat them on their shields with sticks.
In south India, some worship and make offerings to Kaamadeva, the love god of Indian mythology, on Holi.
Traditional Delicacies of Holi:
Any Indian festival is incomplete without grand feast and scrumptious recipes. There are some universal sweets and dishes that are prepared throughout the length and the breadth in the country on this occasion. 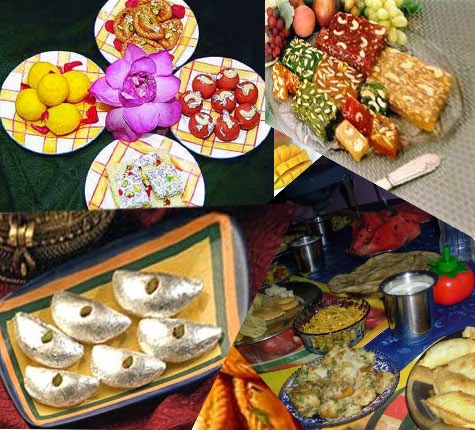 One of the most popular desserts of Holi is “Gujhia”, which is a must for every Indian home during the season. Then, there are “Papris” and ‘dahi vade’ or “Dahi-bhalles” that are prepared in majority of Indian homes on the occasion. The intoxicating “Bhang-ke-vade” and “Thadai”, the sauf and bhang sharabat are the special recipes reserved for the Holi celebrations. 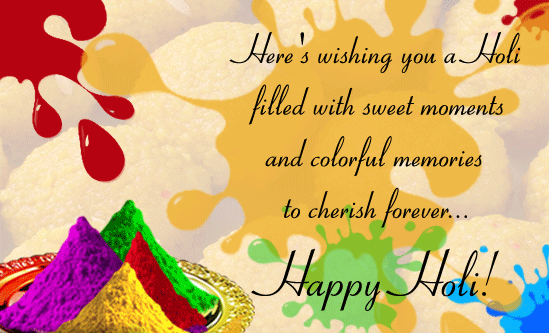 BA Family wishes you all a very Happy and Colorful Holi. Have a Colorful and Safe Holi..!!