Skip to content
Hi there, its Sindbad the Sailor, originally from Hajipur, Bihar. It is more of a confession and less of a success story.
I passed my B. Tech in Information Technology in 2013. I was eligible for P.O and Clerk in 2013 but did not appear as I was quite arrogant at that time thinking that I am an engineer so why should I do all these bank jobs and that too for clerical post. So I started searching for I.T jobs. I did get two but their salary was very low. Then I decided to appear in SBI SO last year and performed very badly. And so within a very short time “THE CAMEL WAS UNDER THE MOUNTAIN”.
So I started preparing for those exams which I once ridiculed. I did not take any coaching and was largely dependent on BA and self-study. I followed R S Agarwal and Arihantfor Quants, Hindu newspaper and Times Now news channel for English. Daily G.K updates for G.A and Daily reasoning quiz for reasoning section.
But these bank exams charge high fees and I did not want to depend on my parents so I started taking tuitions. I had to go 4 km to and fro 5 days a week which was really tough, I could never take rest during afternoon and it did affect my health but then I had no other option. Along with science and maths I purposefully taught them social studies because I knew that this social study will eventually help me in SSC CGL and IB exams and yes it did help me to clear CGL. NCERT books are simply great for SSC and UPSC.
At the same time I started appearing in bank exams. SBI PO was my first bank exam. Then came SBI clerical and SIDBI. I could not clear any of these. Then came RBI Assistant. I had prepared so hard for it and attempted 155 and thought that ok here comes my first bank interview. But could not clear it. I did get 150 but the cut off for Patna Region raised from 129 in 2013 to 156 in 2014. I was disheartened but somehow gained strength after thinking about my parents.
I continued with my efforts. Next was IBPS PO. And guess what? My CGL tier 1 2014 exam clashed with this P.O exam but thank God the timings were different. I could appear in both and thankfully cleared both. P.O interview was just awesome. I got 80 in interview and finally got PNB (my first preference).
Same with IBPS Clerk. My clerk exam clashed with Railway section engineer exam. I have cleared clerk also and allotted to PNB (my first preference).
That day after getting my allotment I rushed to thank God. At the same time I requested Him not to make me arrogant as earlier. I just want to be humble to everyone. My parents are my strengths as well as weakness. Whenever I failed in an exam I would find it extremely hard to face them. And since I am employed now I will try to make their life better. And ya the most important thing. I have made two commitments in my life:
And I would request other members of BA to follow the above two commitments, if possible.
These two years of un-employment has really taught me lot of things. It took away my arrogance and presented me more humility. I hope it continue the same here after.

“Friends, success never comes easy. It demands your sincere effort with full dedication. You have to sacrifice so many pleasures of your life. I wish every one of you achieve your goal.”
THANKS B.A, THANKS SHRUTI MADAM AND B.A FRIENDS 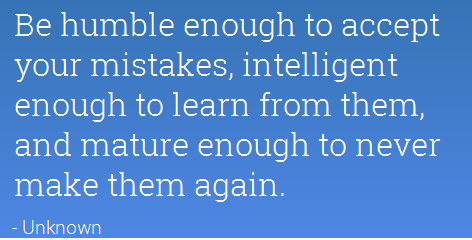