Vaishakha Shukla Chaturdashi is celebrated as Narasimha Jayanti. Lord Narasimha was the 4th incarnation of Lord Vishnu. On Narasimha Jayanti day Lord Vishnu appeared in the form of Narasimha, a half lion and half man, to kill Demon Hiranyakashipu.
The combination of Vaishakha Shukla Chaturdashi with Swati Nakshatra and weekday Saturday is considered highly auspicious to observe Narasimha Jayanti Vratam.
The rules and guidelines to observe Narasimha Jayanti fasting are similar to those of Ekadashi fasting. Devotees eat only single meal one day before Narasimha Jayanti. All type of grains and cereals are prohibited during Narasimha Jayanti fasting. Parana, which means breaking the fast, is done next day at an appropriate time.
It is believed that Lord Narasimha was appeared during sunset while Chaturdashi was prevailing. It is advised to keep night vigil and perform Visarjan Puja next day morning. The fast should be broken on next day after performing Visarjan Puja and giving Dana to Brahmin.
The Appearance of Lord Narasimha
Hiranyakashipu, the king of the demons, wanted to become immortal. He undertook severe penances at Mandarachala to please Lord Brahma. When Lord Brahma appeared in front of him, he asked for immortality. But even Brahma was not immortal. How could he grant immortality to someone? So Brahma agreed to give him any benediction other than immortality. So the demon asked Brahma that he should not be killed by human being or animal or demigod or any other entity, living or non-living. He also prayed that he should not be killed at any place, neither in the daytime nor at Narasimha Jayantinight, by any kind of weapons. He further requested to award him supremacy over the entire universe and perfection in mystic powers. After receiving the benedictions from Lord Brahma, Hiranyakashipu terrorized the entire universe. He conquered the ten directions and brought every one under his control.
When Hiranyakashipu went to Mandarachala to execute severe austerities, his wife, Kayadhu, was pregnant. The demigods headed by Indra attacked the demons and arrested Kayadhu. They wanted to kill the child as soon as it took birth. Narada Maharishi stopped Indra and revealed that the child would be a great devotee of Lord Hari. He took Kayadhu to his hermitage and gave her instructions on spiritual knowledge. The child in the womb of Kayadhu attentively listened to the instructions of Narada Maharishi and became a great devotee of Lord Vishnu.
Hiranyakashipu entrusted his son Prahlada to Chanda and Amarka, the two sons of Shukracharya, for education. They tried to teach him politics, economics and other material activities; but Prahlada did not care for such instructions. He was always meditating on the Supreme Lord. When Hiranyakashipu came to know about this, he was extremely angry and chastised the teachers for teaching the child about vishnu-bhakti. But when it was proved that they were innocent, he decided to kill the child.The order carriers of the demoniac king tried to kill the child by striking him with deadly weapons, putting him under the feet of elephants, subjecting him to hellish conditions, throwing him from the peak of a mountain. But they could not kill him.
Hiranyakashipu became more and more agitated. He challeged Prahlada, “Where is your God?” and Prahlada replied that God resided everywhere. Pointing to one of the pillars in the palace Narasimha Jayanti. Hiranyakashipu asked: “Is your God within this pillar?” and the child answered “Yes. He is.” At once he forcefully stuck the pillar and shattered it into pieces. The Lord instantly appeared from inside the pillar as Narasimha, and killed Hiranyakashipu with His nails. He was neither in the form of a human nor an animal. He used His nails as weapon and killed the demon at twilight (neither day nor night) sitting in the threshold of the palace (neither inside nor outside) by keeping him on His own lap. Thus, the Supreme Lord killed the demon without violating any of the benedictions awarded by Lord Brahma. He appeared out of the pillar to substantiate the statement made by Prahlada. Thus he came to be known as bhakta-vatsala.
Worship Of Lord Narasimha
To impress Lord Narasimha, a person should sit in isolation and should recite Narasimha mantra with a Rudraksha mala. A person who keeps a fast should donate sesame seeds, gold, clothes etc. on this day. A person who keeps a fast on this day is relieved of all problems. Lord Narasimha blesses his devotees and all his wishes come true.
Narasimha Mantra 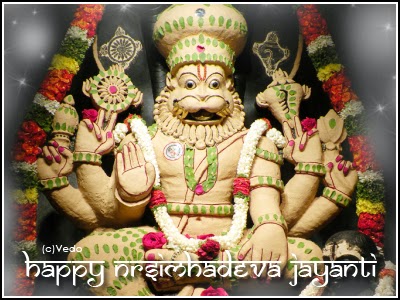