Access to all Banking Exams Courses
Subscribe Now
READ ON APP
Home Uncategorized Night Quiz: Reasoning Quiz
Facebook
Twitter
Google+
Pinterest
WhatsApp
July 20, 2015
Direction : Read the following information carefully and answer the given questions :
In current economic crisis there has been the longest period of slump in India’s automobile market, with sales declining for a second straight year, this has taken its toll with production cuts leading to the loss of 200,000 jobs, according to the Society of Indian Automobile Manufacturers. The Indian auto industry employs 19 million direct and indirect workers. Due to declining sales for the past two years, companies are enforcing regular production cuts and industry executives said that job losses in the sector are quite common.

Seven person A, B, C, D, E, F and G visit a restaurant on four days – Wednesday, Friday, Saturday and Sunday – in a week. At least one person but not more than two person visits the restaurants on each of these days. Each of them is working in different professions – Lawyer, Doctor, Engineer, Hotelier, Professor, Pilot and Businessman. D visit on Saturday with pilot. The Engineer does not visit on Sunday nor with E and G. The businessman F visits alone on Wednesday. B visits on Friday and he is not engineer. C visits on Friday. G is not pilot. The Engineer visits with lawyer. The Hotelier visits on Saturday. A is neither professor nor pilot.
6. What is the profession of A ?
1) Lawyer
2) Engineer
3) Doctor
4) Pilot
5) Professor
7. On which day of week does E visit restaurant ?
1) Wednesday
2) Saturday
3) Friday
4) Sunday
5) Data Inadequate
8. Who among them visits restaurant along with A ?
1) G
2) E
3) D
4) Either E or D
5) None of these
9. On which of the following days does Doctor and Professor visit restaurant ?
1) Wednesday
2) Friday
3) Sunday
4) Either Saturday or Sunday
5) None of these
10. What is D’s Profession ?
1) Pilot
2) Lawyer
3) Engineer
4) Professor
5) Hotelier
Answers:
1. 3; Due to fall in demand the sales, biggest job losses likely to have occurred huge employment gap and most of the auto manufacturer reduce its expenditure in orders to become financialy stable.
2. 1; Due to bad or slow moving economy auto mobile sector is going to suffer for the longest period.
3. 4; Prevention and early detection and proper distribution of cancer facilities and doctors around the country is an effective step to reduce cancer from spreading.
4. 3; Statement E is the only option where government is taking some effective measure to counter the tobacco companies. Therefore it is the valid course of action for government.
5. 1; It is implicit that the government is totally failed to control the cancer from spreading. 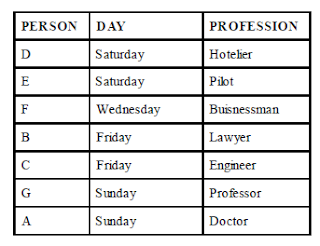