• The scheme aims to ensure that every household has at least two bank accounts.
• Each of the bank accounts which are opening comes with a RuPay debit card.
•  Rs.1 lakh accident insurance cover and an additional Rs. 30,000 life insurance cover.
•  Overdraft facility of Rs.5000  after six months

These benefits will apply to all accounts opened before January 26, 2015.

• The Government of India organised a programme of a large scale at over 77,000 locations — with the participation of  Chief Ministers, Union Ministers, government and bank officials.
• The initial target of the PMJDY was to open bank accounts for 7.5 crore families within a year.

What type of Identification Proof and Address Proof needs to be submitted ?

The Reserve Bank of India has simplified KYC Guidelines and the documents needed to open a new bank account.

Some of India’s large Nationalised banks are taking part in PMJDY. They are: 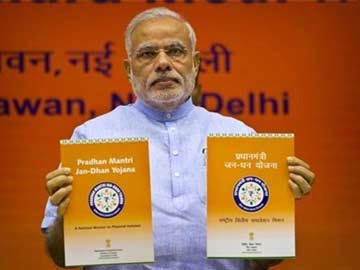