Q3. Who among the following is sitting in the middle of the row?
M and N
N and X
O and X
P and M
None of these
Solution:

Q5. How many friends are there to the left of the person who like White colour?
One
Two
Three
Four
None of these
Solution: 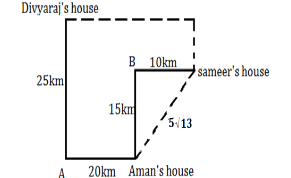 Q7. In which direction is Divyaraj now from his house?
East
West
North-east
South-east
North-west
Solution:

Directions (9-10): Read the following information carefully and answer the given questions.
Merry starts walking from Point M and walks 20m towards south. She then takes a right turn and walks for 30m. She takes a left turn and stops at point O after walking for 15m. Point R is 10m to the east of Point O. Point J is 35m to the north of Point R. Point S is 5m to the west of Point J.
Q9. If Pooja is standing at Point W which is 10m to the north of Point S then, in which direction will she have to walk in order to reach Point O?
Northeast
West
Southwest
South
Southeast
Solution: