Direction (Q. 4- 10): Study the following informations carefully and answer the given questions:
Eight colleagues, A, B, C, D, E, F, G and H, are sitting around a circular table facing the centre but not  necessary in the same order. Each one of them holds a different post –  Manager, Compony Secretory, Chairman, President, Vice President, Group Leader, Financial Advisor and Managing Director.

5.Four of the following five are alike in a certain way based on the given arrangement and thus form a group. Which is the one that does not belong to that group?
1) F – Chairman
2) G – President
3) D – Manager
4) A – Financial Advisor
5) B-  Managing Director

8.Which of the following posts does B hold in the company?
1) Chairman
2) Manager
3) Company Secretary
4) Vice President
5) Financial Advisor

9.Who among the following sits exactly between the Managing Director and H?
1) H and the Chairman
2) B and G
3) The Chairman and C
4) F and C
5) E and the Group Leader

11.Statement:All rings are circles.
All squares are rings.
No ellipse is a circle.

Conclusions: I. some rings being ellipses is a possibility.
II. At least some circles are squares.
12.Statement:No house is an apartment.
Some bungalows are apartment.

Conclusions: I. No house is a bungalow
II. All bungalows are houses.

Conclusions: I. All gases being water is a possibility.
II. All such gases which are not water can never be liquids.

14.Statement:All minutes are seconds.
All seconds are hours.
No second is a day.

Conclusions: I. No day is an hour.
II. At least some hours are minutes. 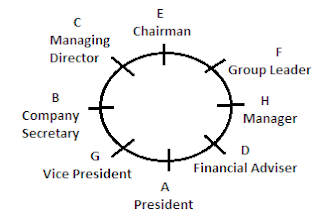