The possible Federal interest rate hike has created an environment of uncertainty in the Indian economy and emerging markets are more concerned about this as it can lead to withdrawal of FIIS leading to economic crunch. Due to criticality of this issue for Indian economy as well, analyze the impact of federal rate hike on emerging economies.It is expected that the Fed will start to increase interest rate any time before the second half of 2015. FII flows are driven by interest rates movement in the US and other developed economies and asset price movements in these economies also impact global flows. There is no doubt that if there is a selloff in global equities, India will not be spared.  The economic situation in India has changed a lot since the formation of new Government led by Mr. Narendra Modi. The government has taken considerable efforts to control currency movement and increase foreign reserves in order to revive the economy, as a result of which investors are now more focused on government steps and the impact of international events has reduced significantly there by reducing the volatility index of Indian equity market.

The stock markets on 9th March, , witnessed a massive selling pressure in line with the meltdown in global stock markets following flow of encouraging job data from the U.S.
The benchmark stock indices plunged sharply as foreign instructional investors (FIIs) pressed for sale. They were in a mood to reduce their exposure in emerging markets such as India and divert money to the U.S. bond market following a possible increase in interest rate by the U.S. Federal Reserve shortly. As a result, the BSE Sensex crashed 604 points or 2.05% to close below the psychological mark of 29000 at 28845 points. The broader NSE Nifty Index close with a loss of 181 points or 2.03% at 8756.75

IMPACT OF UPSURGE
Selling was witnessed across the board. Metal and IT stocks bore the maximum brunt. However, the course of the market will depend on the passage of several important bills pending for approval in Parliament.

Following the sell-off in the equity market, the rupee came under pressure and closed at Rs.62.55 to a dollar against its previous close of Rs. 62.16 per dollar, down 39 paise. “The rupee is under pressure for last two trading sessions and it is because of FIIs are booking profit and sucking out liquidity. The rupee will trade in the range of 62.80 and 61.80 this month,” said Pramit Brahmbatt, CEO, Veracity Financial Services. 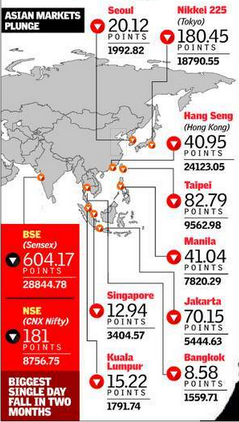 The possibility of a rate hike by the US Fed over the next few months weighed on the India Government Securities market.

The markets logged their biggest drop in over the two months on fears as earlier-than-expected rate hike by the U.S. will hit inflows. It was a sea of red in the domestic markets. Nearly 1,900 shares on the BSE fell while less than 1,000 managed to rise.

Banking, power, capital goods, realty, metal, IT, oil as well as gas, auti and FMCG shares reported sharp losses. Only pharma stocks managed to buck the extremely negative trend on bourses. Furthermore, weakness in the rupee weighed on the sentiments.

Global stocks dip, but Wall Street gains
Stocks in major markets fell on Monday as investors bet the Federal Reserve will raise interest rates sooner than previously expected, while U.S. and euro zone bond prices rose as the European Central bank started its bond-buying program. European shares were down, tracking moves in Asia. Deal news and share buybacks helped Wall Street open higher after two weeks of losses, with the S&P 500 about 2% below its record high set last week. The Dow Jones industrial average rose 105.55 points, or 0.59% to 17,962.33; and the Nasdaq Composite added 142 points, or 0.03% to 4,928.79.