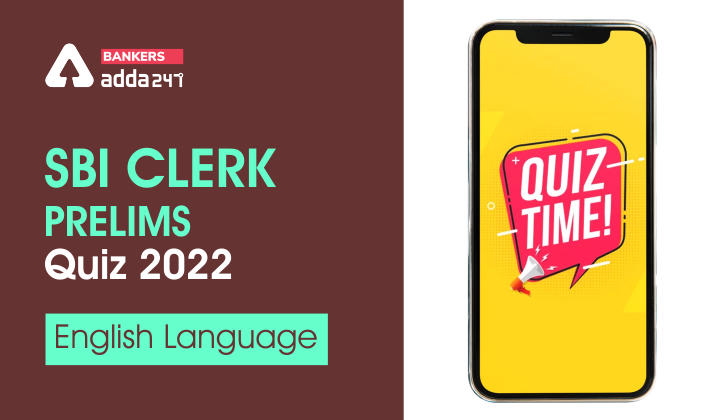 Directions (1-5): Read each sentence to find out whether there is any grammatical error or idiomatic error in it. The error, if any, will be in one part of the sentence. The number of that part is the answer. If there is no error, the answer is (e). (Ignore errors of punctuation, if any).

Q2. The civic authorities had scrapped the trade license (a)/ of a well known restaurant after investigation proved that (b)/ it had chopped down a full grown tree simple because (c)/ the tree was blocking the view of the restaurant. (d)/ No error (e)
(a) A
(b) B
(c) C
(d) D
(e) E

Q4. The minister told reporters that (a)/ although reservations for the backward classes already existed (b)/ based on social aspects, there was no quota for them (c)/ based on political backwardness. (d)/ No error (e)
(a) A
(b) B
(c) C
(d) D
(e) E

Directions (6-15): Read the following interview and answer the given questions based on that. Some words have been printed in bold to help you locate them while answering some of the questions.
A pioneering new book, Gender and Green Governance, explores a central question: If women had adequate representation in forestry institutions, would it make a difference to them, their communities and forests as a national resource? Interview with the author.
Why has access to forests been such a conflict-ridden issue?
This is not surprising. Forests constitute not just community and national wealth, but global wealth. But for millions, forests are also critical for livelihoods and their daily lives.
Your first book, cold Hearts and Barren Slopes (1986), was about forests, is there an evolution of argument here?
Yes indeed : In Cold Hearts and Barren Slopes, I had argued that social forestry, with its top-down implementation and focus on commercial species, was neither ‘social nor forestry’, that would protect neither forestry’, that would protect neither forests nor village livelihoods. The answer, I argued, lay in allowing forests. Finally, in 1990, India launched the joint forest management programme and Nepal also started community forestry. So I decided to see for myself how community forestry was actually doing.
Between 1995 and 1999, I travelled extensively across India and Nepal and found paradox: Forests were indeed becoming greener but women’s problem of firewood shortage persisted and in many cases had become more acute. Also, despite their high stakes in forests, women continued to be largely exclude from forest management. I coined the term “Participatory exclusion” to describe this. However, the current book is less about women’s exclusion. I ask : What if women were present in forest governance? What difference would that make?
But has this question not been raised before?
Economists researching environmental collective action has paid little attention to gender. Scholars from other disciplines focusing on gender and governance have been concerned mainly with women’s near absence from governance institutions. The presumption is that once women are present all good things will follow. But can we assume this? No, Rural women’s relationship with forests is complex.
On the one hand, their everyday dependence on forests for firewood, fodder, etc, creates a strong stake in conservation. On the other, the same dependence can compel them to extract heavily from forests. As one landless woman told me : Of course, it hurts me to cut a green branch but what do I do if my children are hungry? Taking an agnostic position, I decided to test varied propositions, controlling for other factors.
What did you find?
First, women’s greater presenceenhance their effective voice in decision-making. And there is a critical mass effect: If forests management groups have 25-23 per cent female members in their executive committees it significantly increases the likelihood of women attending meetings, speaking up and holding office. However, the inclusion of landless women present in sufficient numbers they are more likely to attend meeting and voice their concerns than landed women. So what matters is not just including more women, but more poor women.
Second, and unexpectedly, groups with more women typically make stricter forest use rules. Why is this the case? Mainly because they receive poorer forests from the forest department. To regenerate these they have to sacrifice their immediate needs. Women from households with some land have some fallback. But remarkably even in groups with more landless women, although extraction is higher, they still balance self-interest with conservation goals, when placed in decision-making positions.
Third, groups with more women outperform other groups in improving forest conditions, despite getting poorer forests. Involving women substantially improves protection and conflict resolution, helps the use for their knowledge of local biodiversity, and raises children’s awareness about conservation.

Q7. Which of the following best describes “participatory exclusion”, as used in the interview?
(a) Outside support
(b) Over dependence
(c) Benefitting without self interest
(d) Contributing with profits
(e) None of the above

Q8. In the second question, the interviewer asked- ‘Is there an evolution of argument here?’ Which of the following best describes that?
(a) From Barren to Greener slopes
(b) From local groups to local groups with more women
(c) A fine balance between conservation and commercial forestry
(d) Top-down approach to community forestry
(e) Participatory exclusion to Grenner slopes

Q10. Why does author say, ‘Rural women’s relationship with forests is complex’?
(a) Dependence forces them to extract and also have concern for conservation
(b) If they protect forests, their livelihood is severly affected
(c) Poor women have been excluded from forest management
(d) They cannot be asked to restore forests which are critical for them
(e) Greener forests do not meet the requirement of firewood

S1. Ans.(c)
Sol. Here, preposition ‘including’ should be used. Hence, eight flights including two international flights …will be the correct usage.

S2. Ans.(c)
Sol. Here, the adverbial form of ‘simple’ should be used. Hence, it had chopped down a full grown tree simply because …will be the correct usage.

S5. Ans.(d)
Sol. Here, being apprehended across the border ….should be used.

S6. Ans.(c)
Sol. High dependence of many on forests

S10. Ans.(a)
Sol. Dependence forces them to extract and also have concern for conservation

S11. Ans.(d)
Sol. are able to meet conservation objectives as well as their own interest

S13. Ans.(a)
Sol. The meaning of word Control (Verb) as used in the passage is: to have power over a person etc; to limit something; to manage to make yourself remain calm; to stop something from getting worst or spreading.
Look at the sentence
Fire fighters are still trying to control the blaze. Hence, the synonym of Controlling should be holding in check.

S14. Ans. (c)
Sol. The meaning of the word Paradox (Noun) as used in the passage is: a person, thing or situation that has two opposite features and therefore seems strange; a statement containing two opposite ideas. Its synonym should be anomaly.

S15. Ans.(b)
Sol. The meaning of the word Acute (Adjective) as used in the passage is : very serious or severe.
Look at the sentence
There is an acute shortage of water.