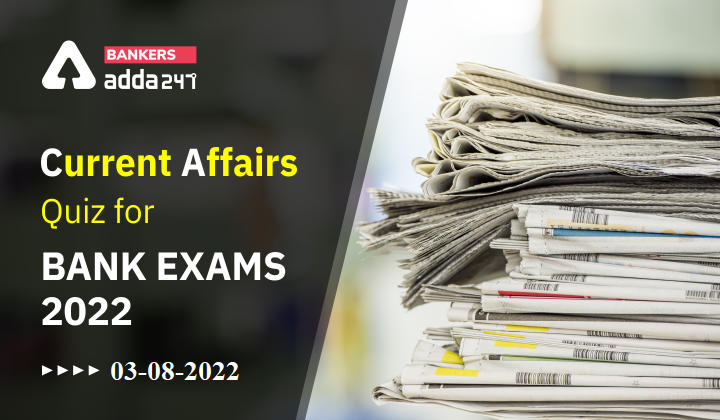 The Current Affairs section constitutes a major part of the General Awareness section in a competitive examination and plays an instrumental role. To supplement your preparation for the General Awareness Section of the upcoming exams like IBPS PO/Clerk Mains, SBI PO Mains and SEBI Grade A Prelims, we are providing you Current Affairs Quiz of 03rd August 2022 covering the following topics Headlines: Muslim Women’s Rights Day, Lockdown Lyrics, Commonwealth games 2022, Press Information Bureau.

Q3. Government of India has formed a task force to look into the situation of monkeypox in the country. Who is the head of this task force?
(a) Aparna Dutt Sharma
(b) Randeep Guleria
(c) Vinod Kumar Paul
(d) Bharati Pravin Pawar
(e) Vijay Kumar Sharma

Q5. Fidel Valdez Ramos, who has passed away recently, was the former President of which country?
(a) Philippines
(b) Vietnam
(c) Malaysia
(d) Cambodia
(e) Syria

Q9. Nirmala Mishra has passed away recently. As a profession she was ?
(a) Writer
(b) Politician
(c) Singer
(d) Journalist
(e) Composer

Q15. Pacific Dragon ballistic missile defense exercise is a biennial drill held between three major countries. Which country is not a part of this exercise?
(a) United States
(b) Japan
(c) South Korea
(d) Philippines
(e) Both a & b

S3. Ans.(c)
Sol. The Ministry of Health and Family Welfare has constituted a special task force (STF) to monitor monkeypox cases in India. NITI Aayog member (health) VK Paul will be the head the task force.

S4. Ans.(d)
Sol. Every year, the World Lung Cancer Day is observed on August 01 to raise awareness about the causes and treatment of lung cancer and highlight the issues of lack of sufficient research funding for the ailment.

S5. Ans.(a)
Sol. Former Philippine President Fidel Valdez Ramos, has passed away due to the complications of COVID-19.. He was 94. Ramos served as the 12th president of the Philippines from 1992 to 1998.

S6. Ans.(c)
Sol. The Indian Institute of Technology (IIT) Madras has launched the ‘Nilekani Centre at Al4Bharat’ to promote the Indian language technology.

S9. Ans.(c)
Sol. Renowned Bengali singer Nirmala Mishra has passed away. She was 81. She sang various songs in Bengali, Odia, and Assamese films.

S10. Ans.(d)
Sol. It was in June, 1919 that a small cell was created in the Home Department. It was rechristened the Central Bureau of Information under a full-fledged Director.

S11. Ans.(e)
Sol. The Aurangabad Smart City Development Corporation Limited (ASCDCL) Aurangabad has become the first in the country to witness the official release of the Environmental Insights Explorer (EIE) data from Google.

S15. Ans.(d)
Sol. The biennial Pacific Dragon ballistic missile defense exercise between the military of South Korea, the United States and Japan is being held, off the coast of Hawaii.