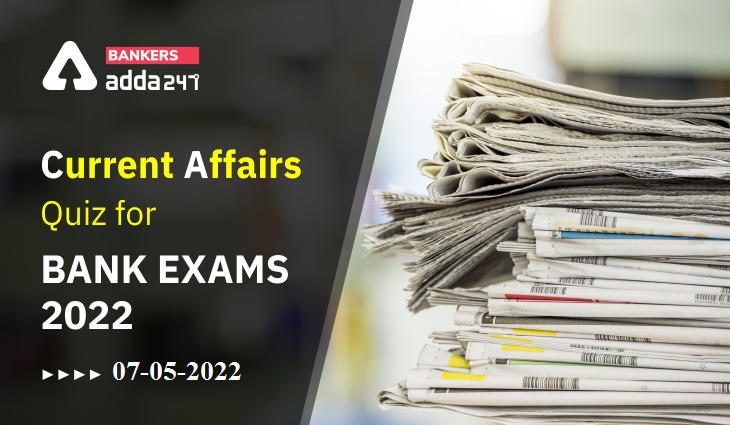 The Current Affairs section constitutes a major part of the General Awareness section in a competitive examination and plays an instrumental role. To supplement your preparation for the General Awareness Section of the upcoming exams like IBPS PO/Clerk Mains, SBI PO Mains and SEBI Grade A Prelims, we are providing you Current Affairs Quiz of 07th May 2022 covering the following topics Headlines: Nethanna Bima scheme, Jivhala scheme, Canara Bank, RailTel, ISRO, Board of Control for Cricket in India.

Q3. Who among the following has been elected to the Board of Directors of the Federal Reserve Bank of New York, New York, United States of America?
(a) Dileep Sanghani
(b) Shersingh B Khyalia
(c) KS Mani
(d) Arvind Krishna
(e) Rajnish Kumar

Q4. Which country will be the first official “Country of Honour” at the upcoming Marche’ Du Film in France?
(a) Nepal
(b) Pakistan
(c) India
(d) Sri Lanka
(e) Bangladesh

Q10. What is the theme of World Hand Hygiene Day (WHHD) 2022?
(a) Our hands, our future!
(b) Raise a hand for hygiene
(c) Clean care for all – it’s in your hands
(d) Achieving hand hygiene at the point of care
(e) Unite for safety: clean your hands

S1. Ans.(e)
Sol. A loan scheme named Jivhala has been launched by the Maharashtra Department of Prisons for the inmates who are serving sentences in various jails across Maharashtra.

S3. Ans.(d)
Sol. Chairman and Chief Executive Officer of IBM Arvind Krishna was elected to the Board of Directors of the Federal Reserve Bank of New York, New York, United States of America, to fill the vacancy in the office for the remaining period of a 3-year term which ends on 31st December 2023.

S4. Ans.(c)
Sol. India will be the official Country of Honour at the upcoming Marche’ Du Film in France, as per the announcement of the Union Minister for Information and Broadcasting, Anurag Singh Thakur.

S5. Ans.(b)
Sol. Shooter Dhanush Srikanth has won gold and Shourya Saini has won the bronze in the men’s 10m air rifle competition in the 24th Deaflympics at Caxias do Sul, Brazil.

S7. Ans.(e)
Sol. ‘International No Diet Day 2022’ is celebrated all over the world on 6 May. On this day, people are made aware of body acceptance, leaving aside behaviour like body shaming, which includes people of all shapes and sizes.

S8. Ans.(d)
Sol. The Indian Space Research Organisation will send a spacecraft to orbit Venus to study what lies below its surface, the space body’s Chairperson S Somnath announced. ISRO is expecting to launch the mission by December 2024.

S9. Ans.(a)
Sol. World Hand Hygiene Day (WHHD) is annually observed across the globe on the 5th of May to maintain global promotion, visibility, and sustainability of hand hygiene in health care.

S10. Ans.(e)
Sol. WHO is marking the day with the theme – Unite for safety: clean your hands, with a focus on encouraging people to clean their hands at the right times with the right products that will help lead to high quality safer care everywhere.

S12. Ans.(d)
Sol. Canara Bank has launched ‘skill loans’ in association with the Additional Skill Acquisition Programme (ASAP), Kerala, the government company under the Higher Education Department. Under this facility, the loan is ranging from ?5,000 to ?1.5 lakh.

S13. Ans.(c)
Sol. The Board of Control for Cricket in India (BCCI) has banned journalist Boria Majumdar for two years after an internal inquiry found him guilty of an attempt to “threaten and intimidate” wicketkeeper Wriddhiman Saha.