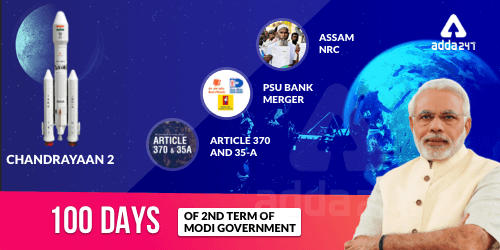 Union Government scrapped article 370 and 35A in J&K and introduced a new bill named “J&K Reorganisation Bill 2019”. The bill bifurcated the state of Jammu and Kashmir into 2 new Union Territories. As per the bill, the union territory of Jammu and Kashmir will have a legislature the same as that of Delhi and union territory in Ladakh will have no legislature, same as that of Chandigarh.

The government has also announced capital infusion of over Rs 55,000 crore into 9 public sector banks.

The most awaited Assam’s final National Register of Citizens list was released and made accessible online and at all NRC seva kendras in the state. From the 3.29 crore applicants, a total of 3.11 crore people were found eligible for inclusion in final NRC list and 19.06 lakh people were excluded from the final NRC list. The updation process of NRC was carried out under The Citizenship Act, 1955, and according to the rules framed in the Assam Accord. The NRC list is the biggest exercise India has undertaken to expel illegal immigrants residing illegally in India.

Indian Space Research Organisation launched India’s 2nd moon mission “Chandrayaan 2” from Satish Dhawan Space Center at Sriharikota. It was launched by GSLV MkIII-M1 Vehicle at 14:43 hours IST. The lander “Vikram” was scheduled to land on the moon between 1.30 a.m. and 2.30 a.m. (IST). Further the roll out of the rover “Pragyan” was scheduled between 5.30 a.m and 6.30 a.m. Lander “Vikram” started its descent at about 1.38 a.m. from an altitude of 30 km at a velocity of 1,680 metres per second, but lost its communication with the Chandrayaan-2 Orbiter when it was at an altitude of 2.1 Km from Moon’s surface.

On the occasion of National Sports Day, Prime Minister Narendra Modi launched the “Fit India Movement” and appealed to the nation to join this fitness movement and make a ‘Fitter & Better India’. The nation-wide Fit India Movement aims to motivate every Indian to incorporate simple, easy ways of staying fit in their everyday life.

The Motor Vehicles (Amendment) Act, 2019 was introduced to amend the 30 years old principle act “Motor Vehicles Act, 1988“. The new “amended act” was implemented from 1st September 2019. The Bill also proposed a scheme to allow cashless treatment of victims of a road accident during the golden hour. The new act aimed to transform the Indian aspect towards the transport system by making Indian roads safer, minimizing corruption and using the technology to revamp the country’s transportation system.

President Ram Nath Kovind gave his assent to the triple talaq bill passed by Parliament and hence making it a law. The new law “The Muslim Women (Protection of Rights on Marriage) Act, 2019” makes instant triple talaq or any other similar form of talaq having the effect of instantaneous and irrevocable divorce a criminal offence and prescribes up to three years of imprisonment for Muslim men giving instant triple talaq to their wives.

The government constituted a new unified ‘Jal Shakti’ ministry which targets to provide clean drinking water as well as to fight with India’s water trouble. The new ministry has been constituted by merging the Ministry of Water Resources, River Development and Ganga Rejuvenation and Ministry of Drinking Water and Sanitation.

The Narendra Modi led government is also planning to make a better India with his 10-point Vision for the decade. These visions include Minimum Government Maximum Governance, Achieving green Mother Earth and Blue Skies through a pollution-free India, Making Digital India reach every sector of the economy and the government is also working towards making India a 5 Trillion Dollar Economy by 2024.

All the Best for the Upcoming Exam!!