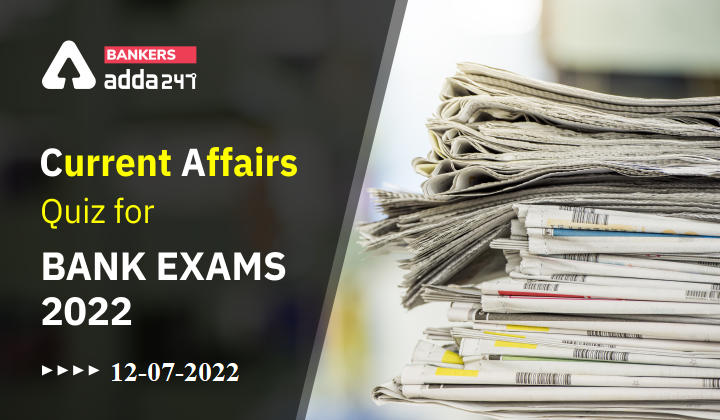 Q5. Which of the following introduced Internet Exchanges in Durgapur and Bardhaman in July 2022?
(a) NITI AAyog
(b) NIXI
(c) NASSCOM
(d) COAI
(e) ASSOCHAM

Q9. As per a recent newspaper report, Nokia has partnered with which institution to set up Nokia Center of Excellence in networked robotics?
(a) IIT Delhi
(b) IIT Madras
(c) IIT Bombay
(d) IISc, Bengaluru
(e) IIT Kanpur

Q11. Who has been acknowledged as the father of the Indian Internet, passed away recently?
(a) Durgesh Patel
(b) Nirpakh Tutaj
(c) Anant Pai
(d) Brijendra K Syngal
(e) Vishal Tewari

Q14. PARIMAN is the Geo-Portal for which of the following places in India?
(a) Hyderabad
(b) National Capital Region
(c) Mumbai
(d) Chennai
(e) Bengaluru

S1. Ans.(e)
Sol. The governing council of the International Fund for Agricultural Development (IFAD) has been appointed as Spain’s Alvaro Lario new President.

S3. Ans.(b)
Sol. National Fish Farmers Day is celebrated on 10th July every year to demonstrate solidarity with all fisher folk, fish farmers and concerned stakeholders throughout the Country.

S8. Ans.(e)
Sol. State-run Coffee Board is planning to focus on developing new varieties that will be resistant to the changing climatic patterns. A Memorandum of Understanding (MoU) between the Coffee Board and ISRO was signed with regard to breeding climate-resilient varieties and assess the carbon sequestration potential in coffee among others.

S9. Ans.(d)
Sol. Nokia has partnered with Indian Institute of Science to set up Nokia Center of Excellence in networked robotics at IISc Bengaluru. The Center of Excellence (CoE) will promote inter-disciplinary research involving robotics and advanced communication technologies in 5G and Artificial Intelligence (AI).

S11. Ans.(d)
Sol. Brijendra K Syngal, former Chairman of Videsh Sanchar Nigam Ltd (VSNL), passed away after a prolonged illness. He was 82. Syngal, who has been acknowledged as the father of the Indian Internet.

S13. Ans.(e)
Sol. Ranil Wickremesinghe has resigned as Sri Lankan prime minister to make way for an all-party government to take over.