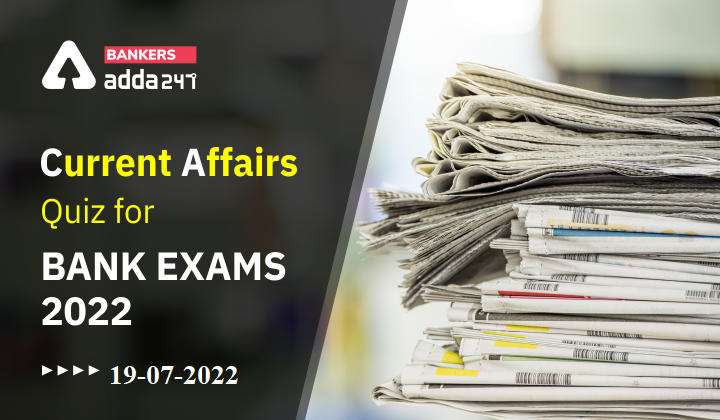 The Current Affairs section constitutes a major part of the General Awareness section in a competitive examination and plays an instrumental role. To supplement your preparation for the General Awareness Section of the upcoming exams like IBPS PO/Clerk Mains, SBI PO Mains and SEBI Grade A Prelims, we are providing you Current Affairs Quiz of 19th July 2022 covering the following topics Headlines: Right to Repair, Shanghai Cooperation Organisation, Commonwealth Games, Fintech startup OneCard.

Q1. Who among the following is the head of the committee set up by the Department of Consumer Affairs for developing a framework for the ‘Right to Repair’?
(a) Navneet Munot
(b) Jai Narayan Patel
(c) Usha Thorat
(d) Nidhi Khatri
(e) T S Tirumurti

Q3. The RBI and which bank has signed an MoU to improve mutual cooperation between them?
(a) Bank Indonesia
(b) Bank of Japan
(c) Bank of England
(d) Swiss National Bank
(e) Central Bank of Argentina

Q10. Nirmal Singh Kahlon, who passed away recently was a politician from which state/ UT?
(a) Haryana
(b) Delhi
(c) Punjab
(d) Himachal Pradesh
(e) Uttarakhand

Q11. The NDA has selected Jagdeep Dhankhar as its candidate for the next Vice President of India, He is the present governor of which state of India?
(a) Tamil Nadu
(b) Kerala
(c) West Bengal
(d) Punjab
(e) Andhra Pradesh

Q13. Which of the following became the first state/UT to have own internet service after receiving the Internet Service Provider (ISP) license from the Department of Telecommunications?
(a) Kerala
(b) Tamil Nadu
(c) Uttar Pradesh
(d) Delhi
(e) Goa

S2. Ans.(b)
Sol. Varanasi will be declared the first Cultural and Tourism Capital of the SCO for 2022-23.

S3. Ans.(a)
Sol. The RBI and the Bank Indonesia has signed an MoU in Bali Indonesia to improve mutual cooperation between them.

S7. Ans.(b)
Sol. The Indian Olympic Association has announced a 322-strong contingent including 215 athletes and 107 officials and support staff for the upcoming Birmingham Commonwealth Games.

S11. Ans.(c)
Sol. West Bengal Governor Jagdeep Dhankhar is the NDA’s pick to be the next Vice President of India. The electoral college for picking the next vice president, who is also the ex-officio Rajya Sabha chairperson, comprises members of the Lok Sabha and Rajya Sabha.

S13. Ans.(a)
Sol. ​Kerala has now become the first and only state in the country to have its own internet.The announcement came in the wake of the Kerala Fiber Optic Network Ltd, an ambitious IT infrastructure project of the government to make the internet accessible to everyone in the state, receiving the Internet Service Provider (ISP) license from the Department of Telecommunications.

S14. Ans.(c)
Sol. Every year on July 18 the world marks Nelson Mandela International Day. The day is a remembrance of the first democratically elected President of South Africa and his long years of struggle for justice against apartheid.

S15. Ans.(e)
Sol. World Day for International Justice is observed on July 17 to commemorate the organisations that work to bring justice to the victims of international criminal acts.