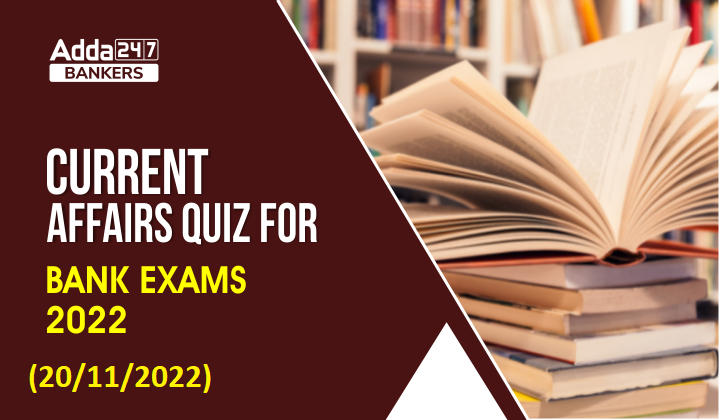 Q2. Which of the following state has become the first state in the country to bring out an Elephant Death Audit Framework?
(a) Maharashtra
(b) Tamil Nadu
(c) Gujarat
(d) Andhra Pradesh
(e) Kerala

Q3. Cambridge Dictionary has declared which word as the Word of the Year 2022?
(a) Permacrisis
(b) Pandemic
(c) War
(d) Homer
(e) Climate strike

Q4. Bandaru Wilsonbabu has been appointed as the next Ambassador of India to which country?
(a) Iran
(b) Iraq
(c) UAE
(d) Syria
(e) Comoros

Q8. Who among the following is invited as International Observer for forthcoming Elections in Nepal?
(a) Rajiv Kumar
(b) Samit Basu
(c) Ashwin Sanghi
(d) Ira Drivedi
(e) Shashi Deshpande

Q9. The National Museum in Delhi signed an MoU with Kolding Museum of Denmark to open an exhibition that focuses on the _____.
(a) Gold Jewellery
(b) Diamond stones
(c) Silver treasures
(d) Stone artefacts
(e) Bronze sculptures

Q10. The United Nations observes World Toilet Day on November 19 annually. The 2022 World Toilet Day theme is?
(a) Leaving No One Behind
(b) Sustainable sanitation and climate change
(c) Valuing Toilets
(d) Making the Invisible Visible
(e) When nature calls

S2. Ans.(b)
Sol. Tamil Nadu became the first State in the country to bring out an Elephant Death Audit Framework that promises thorough investigation and scientific documentation of every jumbo death.

S3. Ans.(d)
Sol. Cambridge Dictionary has declared the word, “Homer” as the Word of the Year 2022. ‘Homer’ refers to a home run in the popular American sport Baseball.

S4. Ans.(e)
Sol. IFS officer Bandaru Wilsonbabu has been appointed as the next Ambassador of India to the Union of the Comoros.