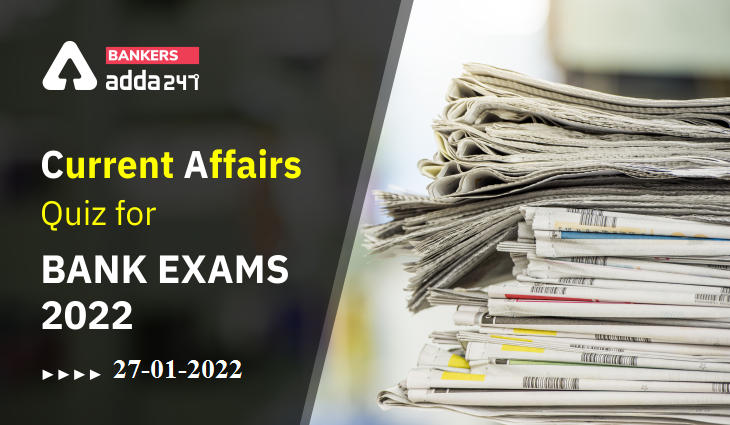 28th December Current Affairs 2022: Here, we are providing the 28th January Current Affairs Quiz. These types of topics are important for candidates who prepare for Bank Exam 2022. In this article, we are covering the following topics Headlines:

Q9. The theme for the International Holocaust Remembrance Day 2022 is __________.
(a) Memory, Dignity and Justice
(b) Remembrance and Beyond
(c) Holocaust Education and Remembrance for Global Justice
(d) Facing the Aftermath: Recovery and Reconstitution after the Holocaust
(e) Journeys through the Holocaust

Q15. Who among was NOT conferred with the Padma Vibhushan this year ?
(a) Kalyan Singh
(b) General Bipin Rawat
(c) Radheshyam Khemka
(d) Prabha Atre
(e) Ghulam Nabi Azad

S1. Ans.(b)
Sol. India is celebrating the 73rd Republic Day on 26 January 2022. The celebrations this year are special as India is in the 75th year of Independence – being celebrated as ‘Azadi ka Amrit Mahotsav’.

S2. Ans.(d)
Sol. The International Customs Day (ICD) is observed on 26 January every year. The day is celebrated to recognise the role of customs officials and agencies and focus on the working conditions and challenges that customs officers face in their jobs.

S3. Ans.(e)
Sol. The state government of Assam has conferred its highest civilian award ‘Assam Baibhav’ for the year 2021 on industrialist and philanthropist Ratan Tata.

S4. Ans.(d)
Sol. The Government of India on January 25, 2022 has sanctioned and notified the Scheme for the amalgamation of the Punjab and Maharashtra Co-operative Bank Ltd. (PMC Bank) with Unity Small Finance Bank Ltd.

S6. Ans.(e)
Sol. Apple has retained its position as the most valuable brand in 2022 as well, according to the Brand Finance 2022 Global 500 report.

S7. Ans.(c)
Sol. Transparency International has released the Corruption Perceptions Index (CPI) 2021 in which India has been ranked at 85th spot (Score of 40).

S9. Ans.(a)
Sol. In 2022, the theme guiding the United Nations Holocaust remembrance and education is “Memory, Dignity and Justice”.

S11. Ans.(e)
Sol. Ramgarh Vishdhari Wildlife Sanctuary, which is among the proposed five sites in the country, is expected to be formally notified as tiger reserve (TR) soon before the Global Tiger Summit, which is to be held at Vladivostok, Russia.

S13. Ans.(d)
Sol. The President of India Shri Ram Nath Kovind has approved 384 Gallantry awards to Armed Forces personnel and others on the eve of 73rd Republic Day celebrations.