i. Union Minister of Agriculture and Farmer’s Welfare, Radha Mohan Singh, inaugurated the 4th Agri Leadership Summit 2019 at the India International Horticulture Market (IIHM) in Ganaur, Sonipat district, Haryana. It was a 3-day summit.
ii. The theme of the summit was “Entrepreneurship & Agri-Business; Agri Allied – A Promising Sector and Agri Service- Direct Marketing”.

i. The 40th International Annual Desert Festival held on the sand dune in Jaisalmer with thousands of tourists participating in the colourful event.
ii. It had interesting events like Mr. Desert and Ms. Moomal competitions, mustache competitions, turban tying, musical and cultural performances, among others. Folk artists also gave their enthralling performance.

i. The Legislative Assembly of Rajasthan passed the Rajasthan Panchayati Raj (Amendment) Bill, 2019 and the Rajasthan Municipality (Amendment) Bill, 2019 to end the minimum education criterion for panchayat and civic polls candidates.
ii. The previous BJP government had introduced the minimum qualification of class 10 for Zila Parishad/Panchayat member election, and class 5 or 8 class for the post of sarpanch.

i. Home Minister Rajnath Singh and Minister for Women and Child Development Maneka Gandhi launched a range of citizen safety initiatives in New Delhi.
ii. Persons in distress can dial a pan-India number: 112. Under this system, all the states have to set up a dedicated Emergency Response Centre, ERC.

i. Iran’s President Hassan Rouhani unveiled the first Iranian made semi-heavy submarine named ‘Fateh’ (‘Conqueror’ in Persian), capable of being fitted with missiles, as per the reporting on Iran’s state TV.
ii. It has subsurface-to-surface missiles with a range of about 2,000 km (1,250 miles) and is capable of reaching Israel and U.S. military bases in the region.
Static/Current Takeaways Important for NIACL AO Mains Exam:
Sci-Tech News
8. AntBot, The First Walking Robot To Navigate Without GPS, Developed

i. AntBot is the first walking robot to have navigational capabilities without GPS or mapping. It has been designed by Centre for Scientific Research (CNRS) and Aix-Marseille University researchers at ISM, on lines similar to desert ants who use polarised lights and UV radiation to navigate in space.
ii. Weighing only 2.3 kg, this robot has six feet for increased mobility, allowing it to move in complex environments, precisely where deploying wheeled robots and drones can be complicated.
9. Israel To Launch Its First Moon Mission

i. Israel is to launch its first moon mission, sending an unmanned spacecraft to collect data to be shared with NASA. According to a report, the 585-kilogram Beresheet (Genesis) spacecraft is to lift off atop a Falcon 9 rocket from Cape Canaveral, Florida.
ii. Mission control will be in Yehud, near Tel Aviv.

i. The Reserve Bank has announced that it will transfer an interim surplus of 28,000 crore rupees to the central government for the half-year ended 31st December 2018. The central bank follows a July-June financial year and usually distributes the dividend in August after annual accounts are finalised.
ii. With this interim transfer, the government will get a total of Rs 68,000 crore from the central bank in the current fiscal. The RBI had transferred Rs 40,000 crore to the government in August 2018.
iii. This will be the highest receipt from RBI in a single financial year for the government, exceeding the Rs 65,896 crore it received in FY16 and Rs 40,659 crore in FY18. 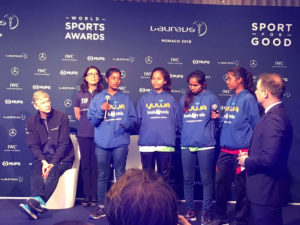 i. Jharkhand based NGO Yuwa won the Laureus Sports for Good Award. Yuwa works for girl empowerment and became the third Indian entry to receive this honour.
ii. Yuwa was founded in 2009 by Americans Franz Gastler and Rose Thomson. It runs a football program in rural Jharkhand with 450 girls. In 2004, Indian Cricket team and Pakistan counterpart shared Laureus Award for the first time and recently by Magic Bus in 2014.
Static/Current Takeaways Important for NIACL AO Mains Exam:
12. Shiv Chhatrapati Awards Conferred On Uday Deshpande And Smriti Mandhana

i. Arun Jaitley resumed charge as the finance minister after a gap of over a month, which was the second break within a year that he had to take to undergo medical treatment.
ii. The President of India, as advised by the prime minister, has directed to assign the portfolios of the Minister of Finance and Minister of Corporate Affairs to Arun Jaitley.
Sports News

i. Elise Merten, world number 21 from Belgium beat world number 3, Simona Halep to win the Qatar Open held in Doha, Qatar.
ii. This is her first WTA Premier-level crown and fifth title of her overall career. Mertens’ triumph over the Romanian was her third win over a top 10 player in Doha.
Obituaries