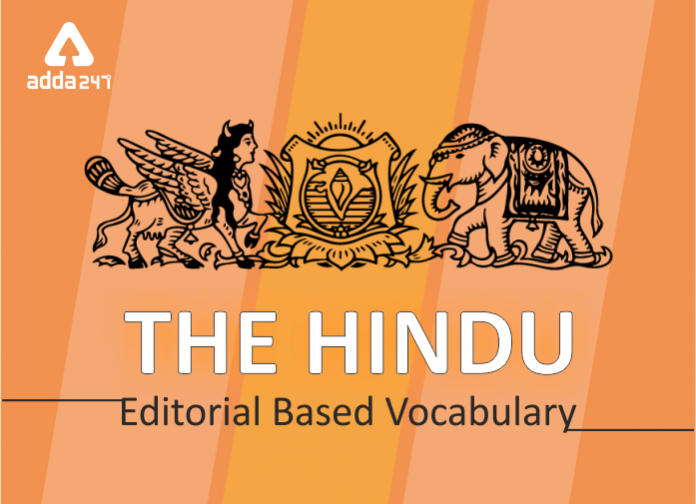 To strengthen the crust and core of your English language what you need is new and effective words added to your dictionary every day. This is a tedious task if you sit with the dictionary every day. Adda247 brings to you a compact way of learning constantly and efficiently. This is today’s Vocabulary for the aspirants who are preparing for the various banking examinations. SBI Clerk, LIC ADO, IBPS RRB, IBPS PO, IBPS Clerk are some of the upcoming examinations which can be prepared with the aid of daily Vocabulary. Vocab will help you excel not just in the examinations but will help you sail through the Interview round of the examinations you are preparing for. The words you choose will accelerate you in the correct path towards success and we hope that this article serves the purpose. Here is the vocabulary for 16th September 2019.

Contrition(Noun) : पश्चाताप
Meaning:- the state of feeling sorry for bad behaviour: the state of repentance.
Synonyms: contriteness, guilt, penitence, regret, remorse, repentance
Antonyms:-impenitence, remorselessness
Example:- The defendant pled guilty to the crime and expressed heartfelt contrition for the things he had done.

PANDER (verb) : कृतार्थ
Meaning: gratify or indulge (an immoral or distasteful desire or taste or a person with such a desire or taste)
Synonyms: indulge, gratify, satisfy, yield.
Antonyms: dissatisfy, deny, refuse, disturb.
Example: She tries to hold on to as much genuine stuff as she can while pandering to fancier tastes.

BLOC (noun)  : संघ
Meaning: a group of countries or political parties with common interests who have formed an alliance.
Synonyms: association, coalition, federation, confederation.
Example: The parliamentary members tended to coalesce in blocs, which were alliances in support of particular philosophies.

STRUT (Verb) : अकड़
Meaning: walk with a stiff, erect, and apparently arrogant or conceited gait.
Synonyms: swagger, swank, parade,
Example: The rooster would strut in the yard when trying to impress the hens.

DELVE (Verb)  : छान – बीन करना
Meaning: research or make painstaking inquiries into something.
Synonyms: investigate, probe, examine, explore
Antonyms: ignore, neglect
Example: Because she was planning a trip, the woman began to delve into a search for plane tickets.

HAPLESS (Adjective) : दुर्भाग्य
Meaning: (especially of a person) unfortunate.
Synonyms: unfortunate, unlucky
Antonyms: fortunate, lucky
Example: When Jason lost his wife and job on the same day, he knew he was a hapless soul.