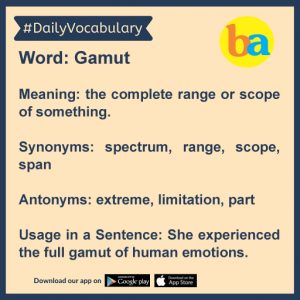 Word: Dissent (असम्मत होना/ असम्मति)
Meaning: hold or express opinions that are at variance with those commonly or officially held.
Synonyms: conflict, disagree, protest
Antonyms: agree, assent, agreement
Usage in a sentence: Voices of dissent began to rise against the bombing.

Word: Interplay (अन्योन्यक्रिया)
Meaning: the way in which two or more things have an effect on each other.
Synonyms: interaction, engagement, interrelationship
Antonyms: isolation, stigmatization
Usage in a Sentence: In the interplay between Ruth and Maude, the author demonstrates a fairly steady grasp of the complicated dynamics of a friendship sustained over decades.

Word: Petition (आवेदन)
Meaning:formal written request, typically one signed by many people, appealing to authority in respect of a particular cause.
Synonyms: request, appeal, entreaty, application
Antonyms: order, command, instruction
Usage in a Sentence: They collected 2,000 signatures on a petition demanding that women be allowed to join the club.

Word: Genre (प्रकार)
Meaning: a style or category of art, music, or literature.
Synonyms: type, kind, species, variety, category
Antonyms: inactivity, nonclassical
Usage in a Sentence: This book is a classic of the mystery genre.