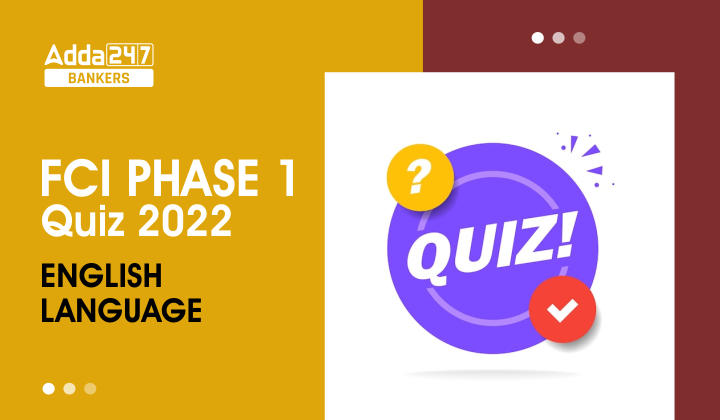 Q5. In a system that sets much store by _____________ the power to censor films in the name of certifying them, random ____________ by petitioners seeking cuts or even a ban often add to the pre-release anxieties of filmmakers.

Directions (6-10): Read each sentence to find out whether there is any grammatical or idiomatic error in it. The error, if any, will be in one part of the sentence. The number of that part is the answer. If there is ‘No error’, the answer is (e). (Ignore errors of punctuation, if any.)

S1. Ans. (b)
Sol. “glimpsed, creating” is the correct set of words that make the sentence meaningful.
Glimpsed means see or perceive briefly or partially.
Contrived means created or arranged in a way that seems artificial and unrealistic.
Inflicting means impose something unwelcome on.

S2. Ans. (e)
Sol. “clarified, focused” is the correct set of words that make the sentence meaningful.
Enfolded means surround or engulf.
Calibrated means adjust (experimental results) to take external factors into account or to allow comparison with other data.

S3. Ans. (c)
Ans. “poised, ahead” is the correct set of words that make the sentence meaningful.
Poised means having a composed and self-assured manner.
Amicable means characterized by friendliness and absence of discord.
Complacent means showing smug or uncritical satisfaction with oneself or one’s achievements.
Aloof means not friendly or forthcoming.

S5. Ans. (c)
Sol. “retaining, attempts” is the correct set of words that make the sentence meaningful.
Retaining means continue to have (something), keep possession of.
Plunge means push or thrust quickly.

S7. Ans. (a)
Sol. ‘has been working’ will be used in place of ‘is working’ because we get to know from ‘for+ time’ used in part (c) of the sentence that the sentence is in present perfect continuous tense.

S8. Ans. (b)
Sol. Use ‘suited’ in place of ‘suits’ because we get to know from ‘yesterday’ used in part (d) of the sentence that the incident occurred in the past.
Example: Neither of my friends came on time and therefore I stayed at home yesterday.

S9. Ans. (b)
Sol. ‘what she could’ will be used in place of ‘what could she’ because reported speech remains assertive in an indirect narration.

S11. Ans. (e)
Sol. The Sequence of sentences after rearrangement is CEAFBD.

S12. Ans. (a)
Sol. The Sequence of sentences after rearrangement is CEAFBD.

S13. Ans. (a)
Sol. The Sequence of sentences after rearrangement is CEAFBD.

S14. Ans. (a)
Sol. The Sequence of sentences after rearrangement is CEAFBD.

S15. Ans. (e)
Sol. The Sequence of sentences after rearrangement is CEAFBD.