Directions (1-5): Study the following information carefully and answer the question given below:
Eight persons A, B, C, D, E, F, G and H are sitting around a circular table. Four of them faces towards centre while the rest of them faces opposite to centre. Each of them was born in a different month of the same year starting from January to August but not necessarily in the same order. E is the second oldest. C who was born in the month of May is an immediate neighbour of A. The persons who were born in June and March are sitting opposite to each other. E is sitting third to the right of D who faces outside. There is only one person sitting between D and F who is not immediate neighbor of E. The person sitting third to the right of F was born in April. H is the youngest and sits opposite to E. G faces a direction opposite to that of F (i.e. if one is facing inside, the other must be facing opposite to the center). Both the immediate neighbours of A are facing towards the center. B sits second to the right of E. D is an immediate neighbour of B. D who is the second youngest sits opposite to A. H faces towards the center. G is older than F.

Direction (11-12): Read the following information carefully and answer the given questions.

Q11. As a part of their sales promotion measures, ‘Star Sports’, a company which produces and sells tennis rackets and balls, wishes to enter into a contract with a leading tennis star for five years for endorsing their products. The move is not a wise one, as no tennis star has ever played for more than three years in the international circuit.
Which of the following is an assumption on which the above assertion is based?
(a) Tennis players, after their retirement from the games, take up assignments such as coaching etc related to tennis.
(b) When new stars come up in tennis, old stars lose their popularity.
(c) The company would not have been able to reap the full benefit of the endorsements in the first three years.
(d) People stop admiring a sports star after they stop playing in international matches.
(e)None of these

Directions (13-15) Read the following information carefully and answer the questions given below:
Seven books P, Q, R, S, T, U and V are published in same month of the different years- 2010, 2016, 2012, 2001, 2005, 2014 and 2019 but not necessarily in the same order.
Book Q published on an odd numbered year. Only three books published in between Q and U. Book R published 4 years after the year in which S published. V published on the year which is completely divisible by 3. T published on an even numbered year before U. P published one of the years before Q. 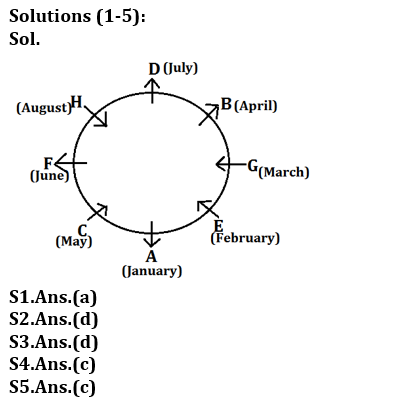 S11. Ans.(d)
Sol. It is unwise to sign up tennis stars for five years as they do not play for more than three years. So, the assumption is that they will lose their popularity once they stop playing internationally.so (d) is the correct answer. (a) is not an assumption to show that the decision is not wise. (c) does not refer to the question of the duration of the contract.
S12. Ans.(d)
Sol. The passage states that the more intellectually demanding a task is, the less obese a person who performs it on a regular basis would be. Therefore, he is assuming that a marketer’s job is less intellectually demanding than those of a doctor or engineer. (b) and (c) is incorrect. (a) is irrelevant. 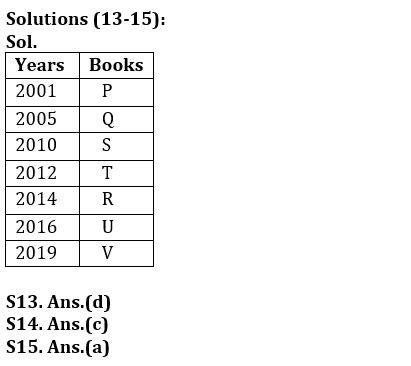