Q3. Which among the following boxes is placed immediately above White colored box?
(a) Q
(b) N
(c) T
(d) O
(e) None of these

Directions (6-10): Study the following information carefully and answer the given questions:
Ten persons are sitting in two parallel rows containing 5 person each, in such a way that there is an equal distance between adjacent persons. In row-1 U, W, X, Y and Z are sitting and all of them are facing South. In row-2 F, G, H, J and K are sitting and all of them are facing North. Therefore, each person sits in a row faces another person of other row.
G sits opposite to the one who sits second to the left of the one who sits third to the right of Y. Only one person sits between G and J. X sits second to the right of Z. J faces neither X nor Z. K sits second to the left of H and he does not sit at any of the extreme ends. F is not an immediate neighbour of K. W faces neither K nor J. 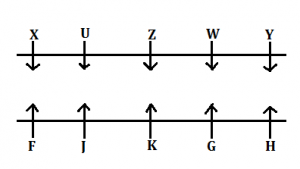