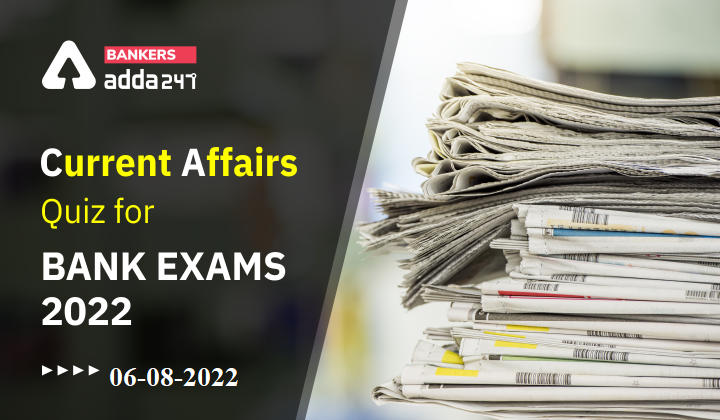 Q1. Which Indian firm is the topped ranked company in the 2022 Fortune Global 500 list among other Indian corporates?
(a) LIC
(b) Reliance
(c) Tata Steel
(d) ONGC
(e) Jio

Q2. The 18th India-US joint military exercise “Yudh Abhyas” is scheduled to be held in October 2022 in which state of India?
(a) Rajasthan
(b) Haryana
(c) Uttarakhand
(d) Telangana
(e) Uttar Pradesh

Q3. The world’s largest floating solar power plant is soon to be built in which state of India?
(a) Tamil Nadu
(b) Haryana
(c) Madhya Pradesh
(d) Gujarat
(e) Rajasthan

Q4. Who has been appointed as the new CFO of the Fintech startup BharatPe?
(a) Suhail Sameer
(b) Shashvat Nakrani
(c) Vijay Kumar Aggarwal
(d) Nalin Negi
(e) Rohit Sharma

Q6. Johnny Famechon who has passed away recently was a former boxing champion from which country?
(a) New Zealand
(b) Spain
(c) Poland
(d) Germany
(e) Australia

Q9. Which company has signed an agreement with Indian Railways to boost its delivery services in the country?
(a) Flipkart
(b) Meesho
(c) Master Delivery
(d) Express Partners
(e) Amazon India

Q12. Langat Singh College has been added to the list of UNESCO’s important heritage observatories in the world, the college is located in which state?
(a) Bihar
(b) Assam
(c) West Bengal
(d) Uttar Pradesh
(e) Jharkhand

Q13. Indian Navy has signed an MoU with which of the following to collaborate on aviation research and development, and to ramp up self-reliance efforts for the Navy?
(a) IIT Madras
(b) IISc Bengaluru
(c) IIT Delhi
(d) JNU Delhi
(e) IIT Kanpur

Q14. The Mars Reconnaissance Orbiter is launched by which of the following Space Agencies?
(a) ISRO
(b) NASA
(c) JAXA
(d) Rascosmos
(e) European Space Agency

S1. Ans.(a)
Sol. From India, the recently-listed Life Insurance Corporation (LIC) has made to the list for the first time and LIC is also the top ranked firm among Indian corporates.

S2. Ans.(c)
Sol. The Armies of India and the US will conduct the 18th edition of fortnight-long mega military exercise “Yudh Abhyas” from October 14 to 31, 2022, at Auli in Uttarakhand.

S3. Ans.(c)
Sol. The world’s largest floating solar power plant is going to be built at Khandwa in Madhya Pradesh. The project will generate 600 Megawatt power by 2022-23.

S5. Ans.(a)
Sol. The International Dairy Federation World Dairy Summit (IDF WDS 2022), is scheduled to be held in New Delhi from September 12 to 15, 2022. The theme of the four-day summit will be ‘Dairy for nutrition and livelihood’.

S6. Ans.(e)
Sol. Former Australian featherweight boxing world champion Johnny Famechon has passed away in after a prolonged illness. He was 77.

S7. Ans.(b)
Sol. The Indian Oil Corporation Limited (IOCL) has signed an MoU with the Bangladesh Roads and Highways department in Dhaka for the emergency supply of petroleum goods via Bangladesh territory to India.

S8. Ans.(c)
Sol. National Institute for Entrepreneurship and Small Business Development (NIESBUD) and Hindustan Unilever Limited (HUL) have signed an MoU. It has been signed for developing entrepreneurial skills among the youth and identifying other aspects for mutual collaboration.

S9. Ans.(e)
Sol. Amazon India has signed an agreement with Indian Railways to boost its delivery services in the country.

S13. Ans.(b)
Sol. The Indian Institute of Science (IISc) and the Indian Navy have signed an MoU to collaborate on aviation research and development, and to ramp up self-reliance efforts for the Navy in line with the goals of ‘Atmanirbhar Bharat’.

S14. Ans.(b)
Sol. Scientists released the first pieces of the multispectral maps made by the Compact Reconnaissance Imaging Spectrometer for Mars (CRISM), according to the National Aeronautics and Space Administration (NASA).