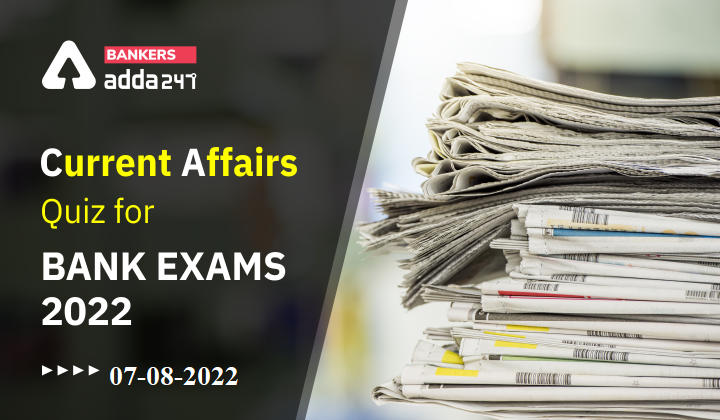 The Current Affairs section constitutes a major part of the General Awareness section in a competitive examination and plays an instrumental role. To supplement your preparation for the General Awareness Section of the upcoming exams like IBPS PO/Clerk Mains, SBI PO Mains and SEBI Grade A Prelims, we are providing you Current Affairs Quiz of 07th August 2022 covering the following topics Headlines: Commonwealth Games 2022, Hiroshima Day, Digital Payments Index, Repo Rate, Reserve Bank of India.

Q5. Which country has become the seventh country in the world to launch a mission to the Moon?
(a) France
(b) Pakistan
(c) Australia
(d) Germany
(e) South Korea

Q6. Bajrang Punia, who won the gold medal for India in the Commonwealth Games 2022, is associated with which of the following sports?
(a) Javelin throw
(b) High Jump
(c) Wrestler
(d) Pole Vault
(e) Triple Jump

Q8. Which state has decided to develop one Sanskrit-speaking village in each of the 13 districts in the state?
(a) Karnataka
(b) Uttarakhand
(c) Bihar
(d) Uttar Pradesh
(e) Himachal Pradesh

S1. Ans.(b)
Sol. The Reserve Bank of India (RBI) in its Monetary Policy Committee (MPC) meeting held on August 05, 2022 has decided to increase the policy repo rate under the liquidity adjustment facility (LAF) by 50 basis points to 5.40 percent with immediate effect.

S4. Ans.(b)
Sol. The US Senate has approved Finland and Sweden’s accession to NATO.

S8. Ans.(b)
Sol. Uttarakhand government has decided to develop one Sanskrit-speaking village in each of the 13 districts in the state.

S9. Ans.(d)
Sol. Hiroshima Day is observed on August 6 to commemorate the atomic bombing of Hiroshima, Japan, in 1945, at the end of World War II.