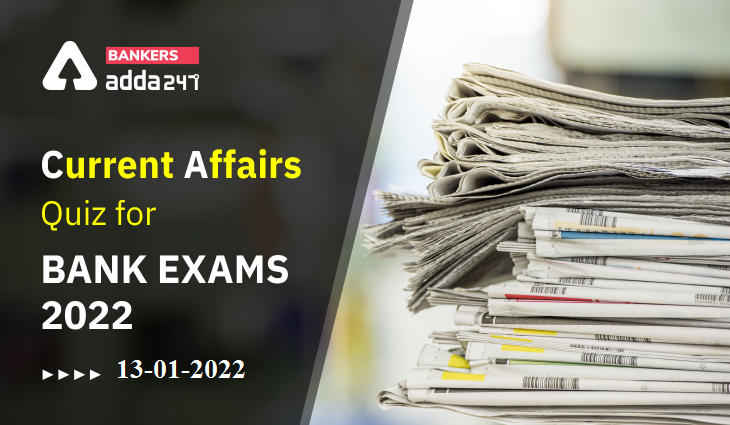 13th December Current Affairs 2022: Here, we are providing the 13th January Current Affairs Quiz. These types of topics are important for candidates who prepare for Bank Exam 2022. In this article, we are covering the following topics Headlines:

The Current Affairs section constitutes a major part of the General Awareness section in a competitive examination and plays an instrumental role. To supplement your preparation for the General Awareness Section of the upcoming exams like IBPS PO/Clerk Mains, SBI PO Mains and SEBI Grade A Prelims, we are providing you Current Affairs Quiz of 13th January 2022 covering the following topics Headlines: India Skills 2021 competition, National Youth Day, IMF’s Chief Economist, ICC Player of the Month Award, North East Festival.

Q8. David Sassoli who has passed away recently was the President of which of these organizations?
(a) European Commission
(b) European Parliament
(c) European Council
(d) European Central Bank
(e) European Union

Q9. Which city has become India’s first city to have a Water Metro Project after the launch of its first boat in December 2021, namely ‘Muziris’?
(a) Aurangabad
(b) Bhopal
(c) Kochi
(d) Mysuru
(e) Dehradun

Q10. Who has been appointed as the head of the RBI’s department for “FinTech”?
(a) Ajay Kumar Choudhary
(b) Deepak Kumar
(c) Ajay Kumar
(d) T Rabi Sankar
(e) Jose J Kattoor

Q12. Which of the following will get India’s first heli-hub with all aviation facilities?
(a) Chennai
(b) Kochi
(c) Guwahati
(d) Bengaluru
(e) Gurugram

Q13. The International Cricket Council (ICC) has announced Ajaz Patel as the winner of the ICC Men’s Player of the Month. He is a cricketer who plays for________.
(a) Pakistan
(b) New Zealand
(c) India
(d) Afghanistan
(e) Australia

Q15. Which state has finished first out of 26 states and union territories in the ‘India Skills 2021’ contest?
(a) Maharashtra
(b) Kerala
(c) Odisha
(d) New Delhi
(e) Punjab

S1. Ans.(b)
Sol. French-born economist Pierre-Olivier Gourinchas has been named as the next chief economist of the International Monetary Fund (IMF).

S2. Ans.(c)
Sol. With the 10 new addition, the total number of athletes under TOPS has increased to 301, which includes 107 in the Core group while 294 in Development group.

S5. Ans.(a)
Sol. The Railway Protection Force (RPF) of the Western Railways zone of Indian Railways has launched a new initiative called “Mission Amanat” to make it easier for the railway passengers to get back their lost luggage.

S6. Ans.(b)
Sol. In India, the National Youth Day is celebrated on 12 January annually to commemorate the birth anniversary of Swami Vivekananda.

S8. Ans.(b)
Sol. The European Parliament President David Sassoli has passed away due to health issues. He was 65.

S9. Ans.(c)
Sol. Kochi, Kerala has become India’s first city to have a Water Metro Project after the launch of its first boat in December 2021, namely ‘Muziris,’ among the 23 battery-powered electric boats being manufactured by Cochin Shipyard Limited.

S10. Ans.(a)
Sol. Reserve Bank of India (RBI) has set up a separate internal department for fintech (Financial technology) by subsuming the fintech division of DPSS (department of payment and settlement systems), Central Office (CO) to facilitate innovation, and help identify, address challenges and opportunities in the fintech sector.

S11. Ans.(d)
Sol. Prominent Kannada writer Chandrashekhar Patil, popularly known as “Champa”, passed away at the age of 82. Champa was a Kannada language activist, a poet and a playwright and also served as President of the Kannada Sahitya Parishat (KSP) and Chairman of the Kannada Development Authority.

S12. Ans.(e)
Sol. Haryana Deputy CM Dushyant Chautala announced that Gurugram will get India’s 1st heli-hub with all aviation facilities. The heli-hub will be the first of its kind in India to have all facilities at one place for helicopters. The heli-hub is proposed to be built in Gurugram & would be near the metro facility along with easy connectivity to industrial areas(Noida & Bhiwadi).

S13. Ans.(b)
Sol. The International Cricket Council (ICC) has announced Ajaz Patel as the winner of the ICC Men’s Player of the Month Award for December 2021. New Zealand’s, Ajaz Patel made history in December, when he picked up 10 wickets in an innings against India at Wankhede, becoming only the third player in Tests to achieve that feat after Jim Laker and Anil Kumble.

S14. Ans.(d)
Sol. The 9th edition of the North East Festival concluded in Guwahati, Assam. The main purpose of this festival is to promote and highlight the commercial and tourism potential of the North East region.