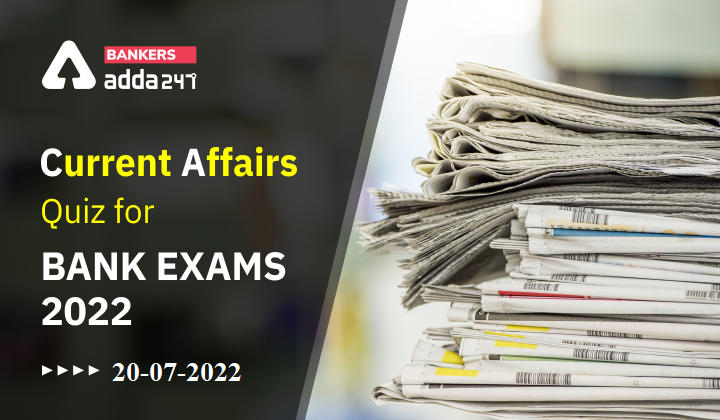 The Current Affairs section constitutes a major part of the General Awareness section in a competitive examination and plays an instrumental role. To supplement your preparation for the General Awareness Section of the upcoming exams like IBPS PO/Clerk Mains, SBI PO Mains and SEBI Grade A Prelims, we are providing you Current Affairs Quiz of 20th July 2022 covering the following topics Headlines: DiCRA, National Stock Exchange, World Athletics Championship 2025, Indian Olympic Association, Expat Insider Rankings for 2022.

Q5. Who has been appointed as the new MD and CEO of the National Stock Exchange (NSE)?
(a) L V Prabhakar
(b) VP Nandkumar
(c) Ashish Kumar Chauhan
(d) Murali M. Natrajan
(e) B. Ramesh Babu

Q6. Which city has been selected as the host city for the World Athletics Championship 2025?
(a) Tokyo
(b) Paris
(c) Beijing
(d) New Delhi
(e) Berlin

Q8. Lleyton Hewitt was inducted into the International Tennis Hall of Fame in July 2022, Hewaitt belongs to which country?
(a) Australia
(b) UK
(c) Russia
(d) Serbia
(e) Spain

Q9. Who among the following is the opposition’s candidate for the Vice President election in August 2022?
(a) D Raja
(b) Sharad Pawar
(c) Sashi Tharoor
(d) Margaret Alva
(e) Tejashwi Yadav

S3. Ans.(d)
Sol. INS Sindhudhvaj has decommissioned after 35 years of glorious service to the nation.

S5. Ans.(c)
Sol. The National Stock Exchange (NSE) has announced the appointment of Ashish Kumar Chauhan as its new managing director and CEO.

S7. Ans.(c)
Sol. Manoj Kumar has assumed the charge as Chairman of Khadi and Village Industries Commission. His predecessor Vinai Kumar Saxena was appointed the Lt Governor of Delhi.

S9. Ans.(d)
Sol. Margaret Alva will be the opposition’s candidate for Vice President. NCP Chief Sharad Pawar said, 17 parties are on board for this unanimous decision.

S13. Ans.(d)
Sol. Mexico has topped the Expat Insider Rankings for 2022, which was released by the InterNations recently, while India has been ranked on 36th position out of the 52 countries on the list, with a high affordability score.

S14. Ans.(c)
Sol. The new centre has been established in remote Dombang, abutting the LAC strong, and is located at a height of 10,040 ft in Sikkim that shares a 220 km front of the India-China LAC.