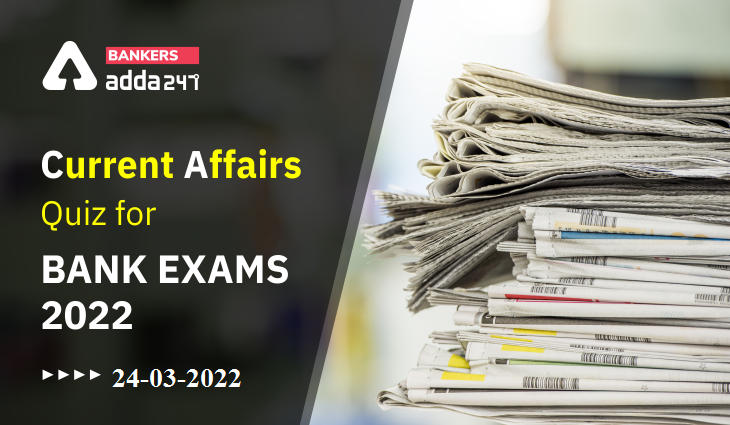 Q2. Which city has been adjudged as the world’s most polluted capital city in IQAir’s 2021 World Air Quality Report?
(a) Dushanbe
(b) Muscat
(c) Dhaka
(d) Islamabad
(e) New Delhi

Q4. What is the name of the joint military training exercise between the Indian army and Uzbekistan which kicked off in March 2022 at Yangiarik?
(a) Ex-Shared Destiny
(b) Ex-Dustlik
(c) Ex-Khanjar
(d) Ex-Sea Breeze
(e) Ex-Vijay

Q9. What is the theme of the 2022 World Meteorological Day?
(a) The Sun, the Earth and the Weather
(b) The Ocean, Our Climate and Weather
(c) Climate and Water
(d) Early Warning and Early Action
(e) Clean Climate

Q13. Which of the following became the hottest place on earth, that its temperature reaches 53.2 degrees on the last summer?
(a) Kuwait
(b) Tonga
(c) Bahrain
(d) UAE
(e) Iraq

Q15. Which country has been adjudged as the world’s most polluted country in IQAir’s 2021 World Air Quality Report?
(a) Chad
(b) Pakistan
(c) Tajikistan
(d) Bangladesh
(e) India

S3. Ans.(c)
Sol. As part of the Azadi ka Amrit Mahotsav, to celebrate 75 years of India’s independence, the WTI Awards have been conferred 75 women achievers for their contribution towards a ‘Sashakt Aur Samarth Bharat’.

S4. Ans.(b)
Sol. The 3rd edition of the joint training exercise named EX-DUSTLIK between the Indian army and Uzbekistan army is being conducted at Yangiarik, Uzbekistan.

S5. Ans.(a)
Sol. India has improved its rank by five spots to be placed at 51st position in the ‘Global House Price Index Q4 2021’ released by property consultant Knight Frank. India was placed at 56th position in Q4 of 2020.

S7. Ans.(a)
Sol. Every year, March 23 is observed as Martyrs Day (also known as Shaheed Diwas or Sarvodaya Day) to commemorate the death anniversary of the freedom fighters Bhagat Singh, Sukhdev Thapar, and Shivaram Rajguru, who laid their lives for the freedom of India.

S8. Ans.(d)
Sol. The former Prime Minister of Mali, Soumeylou Boubèye Maïga has passed away due to illness. He was 67. Maiga served as prime minister of Mali from 2017 until 2019.

S12. Ans.(d)
Sol. Shahabuddin Ahmed, the former President of Bangladesh has passed away at the age of 92 at Dhaka, Bangladesh.