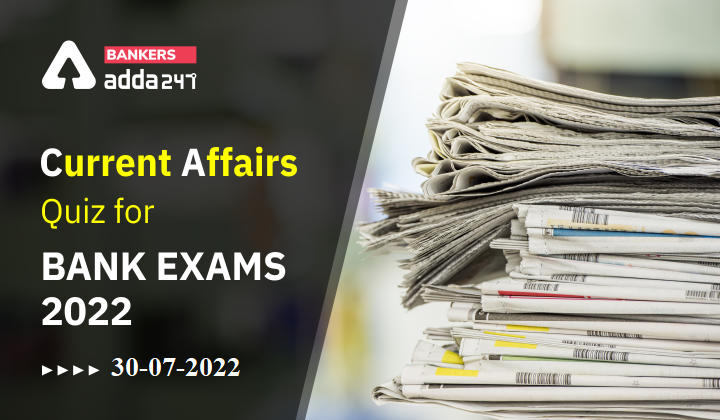 The Current Affairs section constitutes a major part of the General Awareness section in a competitive examination and plays an instrumental role. To supplement your preparation for the General Awareness Section of the upcoming exams like IBPS PO/Clerk Mains, SBI PO Mains and SEBI Grade A Prelims, we are providing you Current Affairs Quiz of 30th July 2022 covering the following topics Headlines: International Tiger Day, Rashtriya Khanij Puraskar, Sir Winston Churchill Leadership Award, The 2022 commonwealth games.

Q2. What is the theme of International Tiger Day 2022?
(a) Their survival is in our hands
(b) India launches Project Tiger to revive the tiger population
(c) Fresh Ecology For Tigers’ Protection
(d) Save the Tiger
(e) Protect the Tiger

Q3. The Rashtriya Khanij Puraskar is a national award given in which of the following category?
(a) Mining
(b) Environment and Climate Change
(c) Literature
(d) Arts
(e) Industries

Q6. Which of the following bank has set up “RACE” goal as part of its plan to be among top 3 PSBs in India?
(a) Punjab National Bank
(b) Canara Bank
(c) Central Bank
(d) State Bank of India
(e) Union Bank

Q11. Which state government is all set to come up with an alternative to the popular corporate online cab service?
(a) Kerala
(b) Tamil Nadu
(c) Andhra Pradesh
(d) Karnataka
(e) Gujarat

Q13. What is the theme of World Nature Conservation Day 2022?
(a) Water, air, soil and trees
(b) Connect with nature
(c) Forests and Livelihoods: Sustaining People and Planet
(d) Cut Down on Plastic
(e) Save the Nature

S1. Ans.(c)
Sol. International Tiger Day is observed globally on 29th July every year. The day is celebrated to raise awareness among individuals, organisations, and governments about the importance of the conservation of tigers.

S4. Ans.(b)
Sol. Every year, World Nature Conservation Day is celebrated on 28 July to create awareness among people about the importance and significance of natural resources.

S5. Ans.(d)
Sol. The Tamil Nadu government has issued an order to implement the first phase of the Chief Minister’s Breakfast Scheme at 1,545 government primary schools for the benefit of over 1.14 lakh children in Classes I-V during 2022-23. The cost would be Rs. 33.56 crore.

S10. Ans.(d)
Sol. As informed by the Asian Cricket Council (ACC), the Asia Cup 2022 will now be held in United Arab Emirates (UAE). Earlier this event was scheduled to take place in Sri Lanka.

S11. Ans.(a)
Sol. The Kerala government is all set to come up with an alternative to the popular corporate online cab service by launching its own e-taxi service next month, considered to be the first such initiative by any state government in the country.

S12. Ans.(c)
Sol. Four-time Formula One champion, Sebastian Vettel who is currently a part of Aston Martin announced his retirement.

S13. Ans.(d)
Sol. This year World Nature Conservation Day will be celebrated under the theme “Cut Down on Plastic.”

S14. Ans.(e)
Sol. Padma Shri Sushovan Banerjee famous as Bengal’s ‘one rupee doctor’ has passed away. Based in Bolpur, Birbhum district, Banerjee was known for treating patients for nearly 60 years.