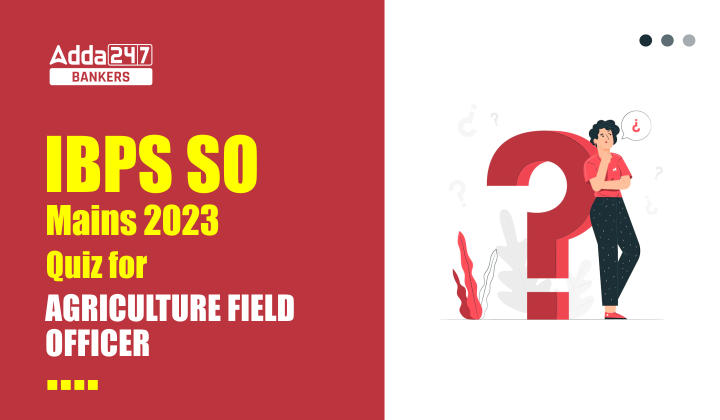 Q1. Which among the following statement of wind erosion describes suspension as a way of transportation?
(a) When particles of soil are very small (less than 0.1 mm) and are carried on long distances and moved parallel to the ground surface.
(b) When the gravitational force is greater than the forces holding the particles in air.
(c) When soil particles of medium size (0.10 – 0.15 mm diameter) are carried by wind in a series of short bounces.
(d) When the bouncing particles are carried by saltation and strike the large aggregates.
(e) None of these

Q2. Micro irrigation system does not contain which of the following?
(a) Drip Irrigation
(b) Sprinkler Irrigation
(c) Surge Irrigation
(d) Canal Irrigation
(e) None of these

Q3. Among traditional methods of rainwater harvesting in India ‘Guls and Kuls’ is carried out in which type of regions?
(a) Plains
(b) Coastal areas
(c) Mountains and hilly areas
(d) Plateaus
(e) None of these

Q4. Wetland (Conservation and Management) rules 2017 has been framed for the wetland management of states and Union Territories of India, wetland rules 2017 has been notified by which among the following organizations:
(a) MoEFCC
(b) CPCB
(c) National Biodiversity Authority
(d) Water literacy Foundation
(e) None of these

Q5. “Third generation biofuels” is produced from which of the following?
(a) Ethanol from crops containing sugar
(b) Algae
(c) Wood or charcoal
(d) Perennial grasses, artificial bacteria’s enzymes and living microalgae
(e) All of these

Q6. Which scheme aims at development of modern infrastructure and common facilities to encourage group of entrepreneurs to set up food processing units?
(a) Macro Management Scheme of Agriculture
(b) Agro Processing Cluster
(c) Agriculture Technology Management Agency (ATMA)
(d) Rural Development through Diversification in Agriculture
(e) None of these

Q7. Which method ensures the elimination or controlled combination of pathogens in food products?
(a) Bio Preservation
(b) Modified Atmosphere
(c) Hurdle Technology
(d) Vacuum Packing
(e) All of these

Q9. Which state has in the lead in the sector of establishing green house by producing high value flowers?
(a) Karnataka
(b) Andhra Pradesh
(c) Gujarat
(d) Tamil Nadu
(e) West Bengal

Q10. Which institute is dedicated to work for identification, characterization, evaluation, conservation and utilization of livestock and poultry genetic resources of the country?
(a) National Institute of Animal Genetic Welfare (NIAGW)
(b) National Dairy and Genetic Research Institute
(c) National Bureau of Animal Genetic Resources (NBAGR)
(d) National mission of Bovine Productivity
(e) None of the above

S1. Ans (a)
Sol. When the soil is exposed to force of wind, wind erosion occurs. Suspension, surface creep and saltation are three types of transportation of soil occurring during wind erosion. When very fine dirt or soil particles are blown into the air suspension takes place once in the atmosphere they are thrown over long distance. The larger particles are moved by the saltation and creep while finer particles are suspended and moved in the air.

S3. Ans (c)
Sol. Guls and Kuls are the traditional rain water harvesting technique which is carried out in Western Himalayas in India. People built diversion channels for irrigation. In flood plains, people developed inundation channels to irrigate their fields. Guls are the channel of waters in mountainous areas which carry water from glaciers to village such as in Spiti valley. Kuls are used in Jammu areas.

S4. Ans (a)
Sol. Wetland (conservation and management) rules 2017 has been notified by MoEFCC (Ministry of Environment, Forest and Climate Change) to prohibit range of activities in wetlands, these new rules replace earlier rules in 2010. Central pollution control broad deals with pollution in the environment which is caused by industries, manmade etc. National Biodiversity Authority is a statutory body under the Ministry of Environment and Forests that provides access to biological resources and sharing the benefits. Water Literacy Foundation is a non-governmental environmental organization to make India a “water efficient nation”. Nature conservation Foundation is a non-governmental wildlife organization to promote the use of science for wildlife conservation in India.

S5. Ans (c)
Sol. There are biochemical biomass crops such as perennial grasses, artificial bacteria, enzymes and living microalgae which are made in labs are termed as third generation biofuels. Second generation fuels include waste biomass, wheat and corn wastes, woody cellulose and lignin polymers, as well as various animal slurries and liquid wastes. First generation biofuels are produced from food crops containing sugar. Algae are utilized for biofuels production.

S7. Ans (c)
Sol. Hurdle Technology is a method of ensuring the pathogens in food products can be eliminated or controlled by combining one or more. Bio-preservation is the use of natural or controlled micro biota or antimicrobials as way of preserving food and extending its shelf life. Modifying atmosphere is to preserve food by operating on the atmosphere around it. Vacuum-packing stores food in a vacuum environment, usually in an air-tight bag or bottle. Pasteurization is a process for preservation of liquid food mainly to dairy products like milk which is heated at about 70 °C for 15– 30 seconds to kill the bacteria present in it and cooling it quickly to 10 °C to prevent the remaining bacteria from growing. Thus, the correct answer is option (c).

S8. Ans (a)
Sol. The Union Ministry of Commerce and Industry has launched pilot Revenue Insurance Scheme for Plantation Crops (RISPC) for protecting the growers from the risks such as pest attacks, yield loss and income decline caused by fall in prices. Union Ministry of Consumer Affairs, Food and Public Distribution deals with (PDS) public distribution system and consumer affairs. The Ministry of Agriculture and Farmers Welfare (formerly Ministry of Agriculture) is the body for formulation and administration of the rules and regulations and laws related to agriculture in India. The Ministry of Panchayati Raj is looking after the ongoing process of decentralization and local governance in the States.

S10. Ans (c)
Sol. National Bureau of Animal Genetic Resources (NBAGR) institute is to work with the identification, characterization, evaluation, conservation and utilization of livestock and poultry genetic resources of the country. National Institute of Animal Welfare has been conceptualized as an apex body in the field of animal welfare and it’s broad to improve animal welfare through research, education and public outreach. National Dairy Research Institute Conducts research in the areas of Dairy Production, Processing and Marketing and Dissemination of innovative dairy production and processing technologies for socio-economic transformations. National Bovine Genomic Centre is for Indigenous Breeds to enhance milk production and productivity through genomic selection among indigenous breeds. National mission of Bovine Productivity is to enhance milk production and productivity and thereby making dairying more remunerative to farmers.