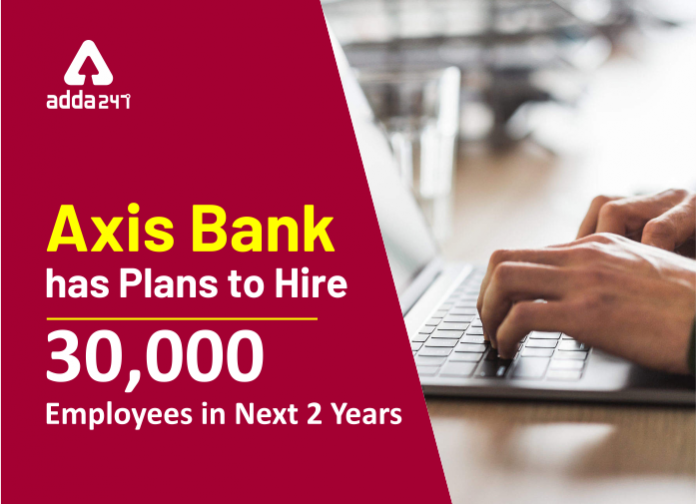 The year 2020 has begun with a boost for all banking aspirants as within 10 days of January, banking sector has released 9800+ vacancies already and now there is another news that Axis Bank has plans to recruit around 30,000 employees in next two years.

As published in the Economic Times, “Axis Bank admitted that it had seen record resignations in the past few months. However, it said it had already hired 28,000 people this fiscal year and would hire another 4,000 in the last quarter. The net new hiring for the bank this fiscal year is 12,800. It also has plans to hire 30,000 people in the next two years.”

Axis bank is expanding at a rapid rate and this is the reason why large number of hirings are expected. Axis Bank has also reported plans to open 550 branches this financial year, thus hiring is expected to take place anytime soon.

Another reason to why such huge no. of hiring is expected in Axis bank is the wave of resignations that hit the bank in past few months. Near about 15,000 people have resigned from the organisation and Axis Bank will conduct recruitment drives to fill the gap through hiring process.

Preparing for Bank Exams, Practice with:

According to Livemint, Rajesh Dahiya, the Executive Director of Axis Bank has said “We shall add another 4,000 more employees in the last quarter of FY20. Much of this is being hired in semi-urban and Tier II or III towns and rural India.”

This is going to be a brilliant news for all banking aspirants as the new wave of recruitments will bring forth many opportunities to get a job in the banking sector in 2020.

Axis bank is reported to be the third largest private sector bank in our country and is known to recruits throught Campus Recruitment in Management Schools and the Axis Bank Young Bankers Program. The Young Banker Program is one year, full-time residential program with campuses in Manipal Global Education, Bangalore and Amity Global Business School, Noida. Details about the same are mentioned on the Axis Bank’s Official website axisbank.com

Full Form of IBPS: All about IBPS Exams and Functions

Full Form of PO: Know Duties and Responsibilities of Bank PO in Detail