What is a Bank Cheques?

Cheque refers to a document issued by an individual to his or her bank, directing their respective banks to pay the person whose name is mentioned in the document the sum specified in it. Such a document needs to be valid that the person who is issuing it has an account in the said bank. The person who acts as an issuer of the cheque is called a drawer, and the person to whom it is issued is the drawee.

What is the Purpose of Cheque?

The purpose of a cheque which is a negotiable instrument is to ensure smooth monetary transactions as per the required specifications. Today cash is the widely used method of payment but if somebody has to do the payment in future date then the cheque is the best payment method. Based on different factors we have different types of cheques. Let’s have a look at them.

Also Read, What is MCLR?

Bearer cheque is the cheque which is payable to the bearer of the cheque or whose name is written on the cheque. Bearer cheque has “or bearer” printed at the end of the dotted lines, which is meant to have the name of the drawee. This feature of this cheque is that it can be presented over the counter of the drawee bank and is payable to the one presenting it. It is an easily transferable instrument and thus can be passed on to another by mere delivery. That is why these cheques are not considered to be secure.

Order cheque refers to the cheque in which the printed word “bearer” is canceled thereby making it payable only to the person whose name is written in the place of drawee. Once the drawer canceled the “bearer” on the cheque, it is automatically understood that this is an order cheque and the bank is directed to only complete the transaction once they have identified, to their satisfaction, the bearer of the cheque is the same person, as named in it.

Crossed cheque refers to the cheque in which the drawer makes two parallel transverse lines at the top left corner of the cheque. He may or may not mention “a/c payee”. By doing so, it makes sure that no matter who presents the cheque to the drawer bank, the transaction is made into the account of the person named in the cheque only. This type of cheque is considered to be safe as it reduces the risk of money being given to an unauthorized person because this type of cheque can only be cashed by the drawee’s bank.

Open cheques refers to the cheque that is not crossed. That is why it is also known as uncrossed cheque. This cheque can be presented by anyone whosoever found it or get it to the drawer’s bank and get the payment. The person having this cheque can further transfer it to another person and can easily make him the drawee. This cheque can only be open by not cutting the word open. Also the person who is issuing the cheque must ensure his/her signatures on both the front and the back of the cheque. Otherwise, a bank can deny the payment to the payee. Bank also makes the payee sign at the back of the cheque while receiving the amount. 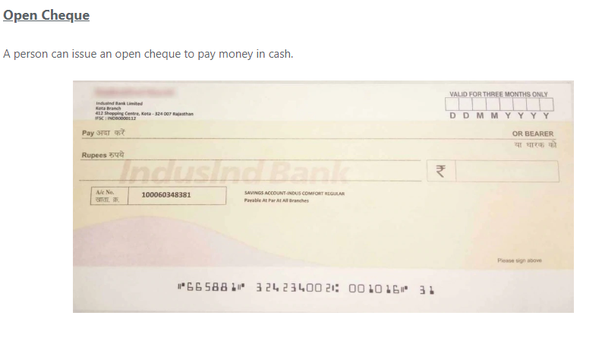 A cheque refers to as Post Dated Cheque when it is bearing a later date than the one on which it is issued. The person can present this cheque at any time at the bank but no transaction will take place before the date mentioned. If you present this cheque after the date mentioned on the cheque, it will still be valid and you can still make the payment.

Stale cheque refers to the cheque which is past its validity period and can no longer be encashed. Earlier, the period was six months from the date of issue. Now, this period has been reduced to three months. So any cheque becomes stale cheque if it is not encashed before three months after its issuance.

Travelers’ Cheques are considered or are equivalent to a universally accepted currency. This cheque is available almost everywhere and comes in various denominations. This cheque act as an instrument issued by the bank itself to make payments from one place to another. The pros of this cheque is that there is no expiry date of a travelers’ cheque and thus it can be used during your next travel as well, or you have the option to encash it once you land back in India.

Self Cheque is the cheque where the drawer usually issues a self-cheque to his or her self. The name column should be filled by the word “self”. Any person can issue a self cheque when the drawer wishes to withdraw money from the bank in cash for his use. A self cheque can only be encashed in the account holder’s or the drawer’s bank. It is important to take precautions with this cheque as if it is lost, another person may easily get it encashed by visiting the drawer’s bank.

Mutilated Cheque refers to the cheque which is torn into two pieces or mutilted. In such type of cheque case, the bank does not make payment unless they get a confirmation from the drawer.

Q. What is Bank Cheques?

Ans.Cheque refers to a document issued by an individual to his or her bank, directing their respective banks to pay the person whose name is mentioned in the document the sum specified in it.

Q. What is a Negotiable Instrument?

Ans. A negotiable instrument refers to a document that guarantees that the bearer of such a document will receive the sum of money specified in it either on-demand or within a stipulated time mentioned in the document.

Q. What is a Bearer Cheque?

Ans. Bearer cheque is the cheque which is payable to the bearer of the cheque or whose name is written on the cheque.

Q. What is Mutilated Cheque?

Ans. Mutilated Cheque refers to the cheque which is torn into two pieces.