IBPS conducted the Mains Examination for the recruitment process of Probationary Officers yesterday i.e. on the 18th of November. The question paper this year was a bolt from the blue in the literal sense that blew the mind of everyone who came up against the challenge. With no chance to escape, the candidates tackled the questions head-on so they could sail through the examination. Hats off to all of them!!

Moving on to the section-wise difficulty level of IBPS PO Mains 2018 Paper, we will give you the low-down on changes introduced in Quant Section which sticks out to be the most exorbitant and knottiest of all. Here are the topic-wise ins and outs of the newfangled Quantitative Aptitude Section of IBPS PO Mains Examination:

Number Series: Two types of new pattern number series appeared in the section-
i. A number series was given and one had to find the nth term of another (of which, the first term was given already). The pattern of the latter would be same as the one applied on the former.

In a nutshell, these were remolded missing number series that came out to be comparatively difficult and time-consuming.
Arithmetic Questions: The questions were asked in the form of double fillers (the ones asked in English Section) and the candidates had to fill in the missing values by choosing from the given options.
Quantity 1 Quantity 2 Quantity 3: The blanks (found out after reading through the instructions) between Quantity 1 ___ Quantity 2 ___ Quantity 3 were to be filled in with the signs of inequalities from the options given as (a,b); (b,c), etc.
Data Sufficiency: Two types of data sufficiency questions appeared in the examination:
i. The given data in these questions was followed by four questions: a, b, c & d, and the candidates were supposed to find the questions (out of the given four questions) that could be solved using the given data.
ii. The second type of data sufficiency questions was based on the usual pattern in which a question was given followed by four or five statements and students had to find out the data that was sufficient to answer the questions. Unlike previous year questions, there were more than two statements (as many as four or five statements) under every question.
Data Interpretation: Every year, there used to be 5 or 6 questions on every data interpretation but this year, there were only 3.
i. Radar Graph reappeared after 2 years of disappearance from the banking examination.
ii. Questions under DI also involved Data Sufficiency. Two statements based on DI were given and students had to choose the option that had the statements which were sufficient to answer the question.
Algebra: This kind of algebra question appeared for the first time in the history of banking examinations.
Caselet: Caselet asked in Quant Section appeared more like a cloze test that is asked in the English Section with questions having four blanks. Each blank had to be filled in by choosing from the five options given below.
This is what the changed pattern of Quantitative Aptitude Section of IBPS PO Mains Examination looked like. Stick around, we will also provide you with example questions under this post soon. If you have any doubts regarding the new pattern questions mentioned in the post, feel free to drop your query in the comment section below. 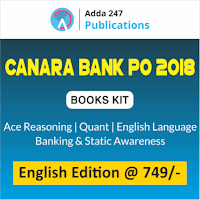