CET 2020 by NRA : The historic decision to set up NRA in order to streamline the recruitment process has been taken by the Union Cabinet chaired by Prime Minister Narendra Modi and now CET or Common Eligibility Test Common Eligibility Test will be conducted for all central government jobs by the National Recruitment Agency. The aim of setting up of NRA is to reduce expenses spent on different examinations for the recruitment process.

The announcement was done by the Union Minister Prakash Javedkar. With NRA approval, round off 2.5 crore job seekers in India who apply for multiple examinations to various government and public sector agencies will now have to appear for a single online entrance test, i.e. NRA CET and this would be a beneficial decision for the young candidates who are seeking for government jobs.

Click on the pdf link and read out the official announcement for CET exam.

The announcement for NRA was first made in February during the Union Budget briefing by Union Finance Minister Nirmala Sitharaman. On 25th June 2020, the Union Minister Jitendra Singh had announced that it was at an advanced stage and will be established soon officially and on 19th August, it got a green signal to go.

For making the test hassle-free, the NRA will be cross-cutting the unnecessary expenses, inconvenience, and time of the government as well as the candidates. 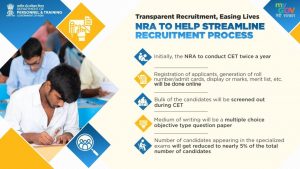 Only a single online CET By NRA will be conducted for recruitment in non-gazetted posts in both the government and public sector banks. There won’t be any separate examination for these posts.The validation period for CET scores will be for three years counted from the date of the result declaration.

Each candidate will be provided with two additional chances to improve their scores in the CET and the best score out of the three scores will be considered.

There will be no restrictions on the number of attempts made by the candidates within the age limits. Like before, the SC/ST/PwD/OBC candidates will be provided with relaxation to the upper age limit.

On a cost-sharing and time-saving basis, the NRA will be sharing the CET merit list on the state-level, UTs, PSU, and private sector for the recruitment process.

CET will be conducted in every district to make ease for the rural, women, youth, and disabled candidates to appear in the exam.

Separate CET would be conducted for Graduate, Higher Secondary, and Matriculate levels.

For the non-technical posts such as SSC, Railways, IBPS selection, this test would be replacing the Tier-1 exam.

The new National Recruitment Agency will be similar to the National Testing Agency which conducts examinations for admission in medical and engineering courses. 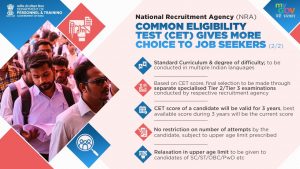 The syllabus of CET is yet to be declared but we are not expecting a lot of changes in it. We expect that there will be four sections namely: English Language, Reasoning ability, Quantitative Aptitude and General Awareness. The syllabus will incorporate the preliminary syllabus of all the three exam testing agencies.

Q. What is the aim of setting up the NRA for CET?

With the aim of centralizing all the government job exams, the National Recruitment Agency is set up to conduct single entrance test.

Q. How many number of attempts a candidate have for CET?

There is no limitation to the number of attempts unless the candidate reaches the upper age limit prescribed.

Q. Will there be any age relaxation for the candidates belonging to SC/ST/PwD/OBC?

Yes there would be an upper age relaxation provided to these category candidates.

Q. Will the CET exam be conducted in all Indian languages?

The CET exam will be conducted in multiple languages as announced by the authority.