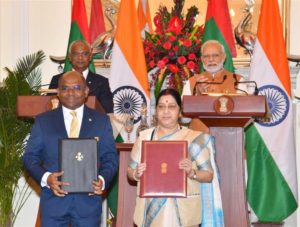 i. The new visa agreement between India and Maldives came into force. The new policy provides a liberal visa policy for Maldivian citizens seeking medical treatment as well as education and business opportunities in India.
ii. The agreement has come into effect after all formalities including information being provided to all immigration offices, border points and customs authorities have been completed.
Static/Current Takeaways Important For LIC AAO Mains Exam:
2. India-Bangladesh Jointly Inaugurated 4 Development Projects

i. Indian gymnast Dipa Karmakar was selected as Barbie role model & was presented with a one-of-a-kind doll by Barbie as the company celebrates its 60th anniversary.
ii. She was part of the ‘Shero’ program launched in 2015 by the company. 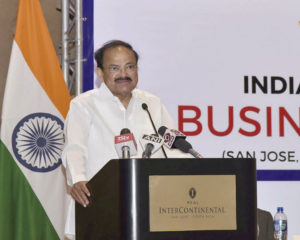 i. India is the second largest importer of weapons in the world, as per the annual report ‘Trends in International Arms Transfers-2018’ released by the think tank Stockholm International Peace Research Institute (SIPRI). Saudi Arabia is now the world’s largest weapons importer.
ii. After maintaining its position of world’s largest arms importer for about 8 years, India dropped down to be the second largest importer of weapons during 2014-18. India accounted for 9.5% of the global total imports during 2014-18, while Saudi Arabia accounted for 12% of the total imports during the period.

i. State-owned Punjab National Bank (PNB) has sanctioned loans worth Rs 689 crore to over 1,600 Micro, Small and Medium Enterprises (MSMEs) through the psbloansin59minutes.com portal as part of its effort to promote such industries.
ii. Under the Mudra Yojana, the bank has offered loan to over 2.69 lakh small entrepreneurs this fiscal (till February 14, 2019).
Static/Current Takeaways Important For LIC AAO Mains Exam:
10. NCLT Clears ArcelorMittal’s Rs 42,000-crore Bid To Take Over Essar Steel

i. The Ahmedabad bench of the National Company Law Tribunal (NCLT) has approved the Rs 42,000-crore resolution plan submitted by ArcelorMittal for the debt-ridden Essar Steel Ltd.
ii. ArcelorMittal’s takeover proposal for the indebted steel-maker was approved by the Essar Steel’s Committee of Creditors last October and it was pending before the NCLT for approval since then.
हिंदी में पढ़े