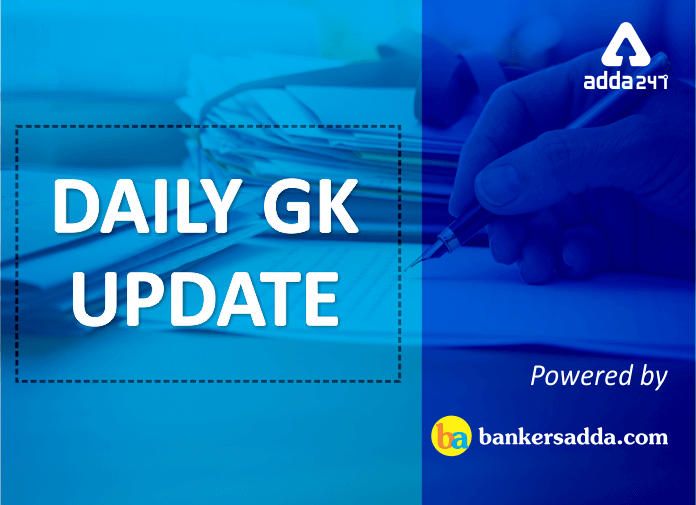 Dear Aspirants,
General awareness section is the most important part of every competitive exam, it can help you score well in the exam if you are updated with all the current news. Banking Awareness, Static GK and the current news are the parts that make the GA section complete. It is important to know what is happening in and outside of India. GK updates are incorporated with the important news that made the headlines today. It is the complete bag of the important news that held all day long. One should have complete knowledge about the banking terms, current affairs news, etc. So, here is the GK update of 8th and 9th September to help you prepare the Current affairs part. After reading this section, you can successfully attempt Current Affairs Quiz.

i. Vijay Kumar Chopra, who is the Chief Editor of the Punjab Kesari Group of newspapers and Vineet Jain, Managing Director (MD) of Bennett, Coleman and Company Limited (BCCL), the publisher of Times of India, is unanimously elected as Chairman and Vice-Chairman of Press Trust of India(PTI) the country’s premier news agency.
ii. Vijay Kumar Chopra was succeeding N Ravi, publisher and former Editor-in-Chief of the Hindu and Vineet Jain earlier served as the chairman of PTI in 2010.
Static/Current Takeaways Important For RRB Main 2019:
Defence

i. The Finance Ministry has introduced a Code of Conduct for non-official directors of public sector banks. Under the new rules, the PSBs board will also have to send an annual performance report that rates a director based on professional and ethical conduct, and contribution to the board.
ii. The performance evaluation by peers will measure the director on various parameters including avoidance of direct or indirect conflict of interest, acting according to rules in the best interest of the bank, avoiding any gain to self or associates and maintaining confidentiality.
iii. The above measures taken by the department of financial services at the finance ministry aims to improve corporate governance in banks.
Static/Current Takeaways Important For IBPS RRB PO Mains:
5. Government to recapitalise Public Sector Insurance companies

i. The Department of Financial Services has approved the Rs 12,000 crore capital infusion plan in the 3 state-run general insurance companies. The decision has been taken to boost their capital base and meet regulatory norms.
ii. The 3 state-run general insurance companies list includes National Insurance, Oriental Insurance and United India Insurance.
iii. The recapitalisation will also improve their solvency ratio and prepare the 3 companies for the merger which will make the entity the largest insurance company in the country.
Summit and Conference
6. 68th Plenary session of NEC begins in Guwahati

i. The 68th Plenary session of the North Eastern Council (NEC) begins in Guwahati, Assam. Union Home Minister Amit Shah Chaired the 2-day event.
ii. Governors and Chief Ministers of North Eastern states will attend the event. During the two-day session, there will be presentations from various ministries and state governments on various developmental issues which are critical to the North East.
7. 1st conference on military medicine for SCO to be held in Delhi

i. The 1st conference on military medicine for the Shanghai Cooperation Organisation (SCO) member states will be held in Delhi. The conference will be the first military co-operation event hosted by India, under the SCO Defence Co-operation Plan 2019-2020, after it became an SCO member-state in 2017.
ii. The conference will be conducted by the Indian Armed Forces under the aegis of Headquarters Integrated Defence Staff (HQ IDS), with the aim to share best practices in the field of military medicine, build capacities and overcome a common challenge. During the conference, the Indian Armed Forces will also demonstrate the Rapid Action Medical Team and organise a visit for the delegates to the Army Research and Referral Hospital.
Static/Current Takeaways Important For RRB NTPC/IBPS RRB Mains:
Sports
8. World’s highest marathon “Ladakh Marathon” held in Leh

i. The 8th edition of Ladakh Marathon was held in Leh. It is the highest marathon in the world as it is held at over 11,000 feet above the mean sea level.
ii. The Marathon was held in the categories of 42 Km Full Marathon, 21 Km half marathon and 7 km long Run for Fun. Over 6000 runners from 25 countries participated in the four categories of Ladakh Marathon.
iii. The 9th Edition to be held in 2020 will be a qualifying race for the Abbot World Marathon Majors.

i. India Red beat India Green by an innings and 38 runs to clinch the Duleep Trophy title on the fourth day at Bengaluru. India Red had scored 388 in their first innings.
ii. On the other hand, India Green compiled 231 runs in their first innings and 119 in their second innings. Abhimanyu Easwaran, who made a brilliant 153 for India Red, was named player of the match.
10. Charles Leclerc wins the Italian Grand Prix

i. Ferrari’s Charles Leclerc has won the Italian Grand Prix. The event was held at the Autodromo Nazionale Monza track, Italy. Valtteri Bottas and Lewis Hamilton of Mercedes finished the race at 2nd and 3rd position respectively.
11. US Open 2019 Concludes: Complete List of Winners

i. The 2019 US Open was the 139th edition of tennis’ US Open. Since 1987, the US Open has been chronologically the fourth and final Grand Slam tournament of the year.
ii. This year US Open was held on outdoor hard courts at the USTA Billie Jean King National Tennis Center in New York City. The tournament was an event run by the International Tennis Federation (ITF) and was part of the 2019 ATP Tour and the 2019 WTA Tour calendars under the Grand Slam category.
iii. The tournament consisted of both men’s and women’s singles and doubles draw as well as a mixed doubles event.
iv. The United States Open Tennis Championships is a hard court tennis tournament. The tournament is the modern version of one of the oldest tennis championships in the world, the U.S. National Championship, for which men’s singles and men’s doubles were first played in 1881.

Here is the Complete List of Winners in Different Category (with their Respective Countries):

i. Kenya’s Brigid Kosgei completed the fastest half-marathon ever ran by a woman. She won the Great North Run in a time of 1 hour, 44 minutes and 28 seconds. She took 23 seconds less than the world record set in 2017 by fellow Kenyan Joyciline Jepkosgei.
13. Rafael Nadal beats Daniil Medvedev to win US Open men’s final

i. Canadian teenager Bianca Andreescu stunned Serena Williams 6-3, 7-5 to grab the US Open 2019 women’s singles title.
ii. The 19-year-old Andreescu becomes the first Canadian singles player to win a Grand Slam event. iii. With the victory, Andreescu also jumps into the top 10 in the WTA rankings. The 19-year-old teen is also the first woman to win the trophy at Flushing Meadows in her tournament debut in the Open era.
iv. Meanwhile, Serena Williams has lost each of her last four Grand Slam finals, all with a chance to tie Margaret Court’s record of 24 Grand Slam singles titles.
15. Lasith Malinga becomes first T20I bowler to claim 100 wickets

i. Sri Lanka’s Lasith Malinga has become the first T20I bowler to take 100 wickets during the 3rd T20I against New Zealand at Pallekele. He also took a hat-trick, dismissing 4 batsmen in 4 consecutive deliveries and became the first-ever bowler to pick up 2 hat-tricks in T20I cricket.
ii. Lasith Malinga also surpassed Wasim Akram and set a record for the most number of hat-tricks in international cricket. Till now he has claimed 5 hat-tricks in his international career.
Books and Authors
16. A book titled ‘Fortune Turners: The Quartet That Spun India To Glory’ launched

i. ‘Fortune Turners: The Quartet That Spun India To Glory’, book on India’s spin quartet has been launched. The book on India’s 4 spin legends: Bishan Singh Bedi, Erapalli Prasanna, Bhagwat Chandrashekhar and S. Venkataraghavan has been written by Aditya Bhushan and Sachin Bajaj.
Obituaries

i. Ram Jethmalani, one of India’s finest lawyers and a former union minister has passed away. He was 95.
ii. He was a six-time Rajya Sabha member, served as a Union Minister in the United Front and NDA governments.
iii. He joined the BJP-led NDA ministry in 1998 and then again in October 1999.
iv. Mr. Jethmalani had also served as the chairman of the Bar Council of India.

i. Actor and Kathak dancer Veeru Krishnan passed away. He was best known for his work in films like Raja Hindustani, Dulhe Raja, Akele Hum Akele Tum among others. He was trained several actresses in dance over the years.
Important Days
19. International Literacy Day: 08th September

i. International Literacy Day celebrated annually on 8 September. It is an opportunity for Governments, civil society and stakeholders to highlight improvements in world literacy rates, and reflect on the world’s remaining literacy challenges. The issue of literacy is a key component of the UN’s Sustainable Development Goals and the UN’s 2030 Agenda for Sustainable Development.
ii. The Theme of International Literacy Day 2019 is Literacy and Multilingualism.
Miscellaneous
20. Visakhapatnam railway station sets up ‘fun zone’

i. A fun zone, the first of its kind in India, has been set up by the Railways at the Visakhapatnam Railway Station, Andhra Pradesh.
ii. The Gaming zone was inaugurated at platform number 1. The children can enjoy games during their waiting period for trains. The gaming zone has different interesting games for children & adults. iii. The fun zone will have all the high-tech gaming activities at par with game parlours.
Static/Current Takeaways Important For RRB NTPC/IBPS RRB Mains: