i. A book titled, ‘Mann Ki Baat- A Social Revolution on Radio’ was released by Finance Minister Arun Jaitley in New Delhi. The book is a compendium encompassing 50 editions of the ‘Mann Ki Baat’ programme by Prime Minister Narendra Modi on All India Radio.
2. Usha Thorat-led task force to ensure stability of external value of rupee

i. The Reserve Bank of India has constituted an eight-member task force on offshore rupee markets, headed by Usha Thorat former Deputy Governor, to look into issues related to the markets and recommend appropriate policy measures to ensure the stability of the external value of the rupee.
ii. The terms of reference of the task force include assessing the causes behind the development of the offshore rupee market; study the effects of the offshore markets on the rupee exchange rate and market liquidity in the domestic market; and recommend measures to address concerns, if any, that may arise out of offshore rupee trading.
3. India to grow at 7.3% in 2019, 2020: Moody’s

i. According to Moody’s, Indian economy is expected to grow at 7.3 percent in the calendar year 2019 and 2020, and the government spending announced ahead of elections this year which will support near-term growth.
ii. Moody’s stated in its quarterly Global Macro Outlook for 2019 and 2020. In 2018-19 fiscal, ending March 2019, the Indian economy is estimated to have grown 7 percent, lower than 7.2 percent in 2017-18.
4. Ex-Finance Secretary Hasmukh Adhia appointed non-executive chairman of BoB 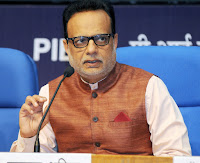 i. Former Finance Secretary Hasmukh Adhia was appointed as non-executive chairman of Bank of Baroda. The Appointments Committee of the Cabinet has approved his appointment as the part-time non-official director as well as non-executive chairman on the board of Bank of Baroda for a period of three years.
ii. Adhia, a 1981-batch IAS officer of Gujarat cadre, superannuated on November 30 last year. He last served as the Finance Secretary.
5. Sushma Swaraj addresses OIC Foreign Ministers plenary session in Dubai 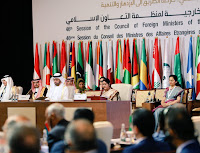 i. External Affairs Minister Sushma Swaraj addressed the plenary session of the foreign ministers’ meet of the Organisation of Islamic Cooperation states in Abu Dhabi.
ii. Swaraj presented a picture of the secular fabric of India and began the speech by saying that she stands as a representative of land, that has been for ages a fountain of knowledge, a beacon of peace, a source of faiths and traditions, and home to religions from the world.
6. Centre, ADB sign 926 million loan agreement to operationalize two lines of Mumbai Metro

i. The Centre and the Asian Development Bank (ADB) have signed a 926 million dollar loan agreement to operationalize two lines of the Mumbai Metro Rail System.
ii. It is the single largest infrastructure project loan in ADB history approved by the ADB Board. Once operational by the end of 2022, an estimated two million passengers a day will use the two new lines and will travel in improved safety and comfort.
हिंदी में पढ़े