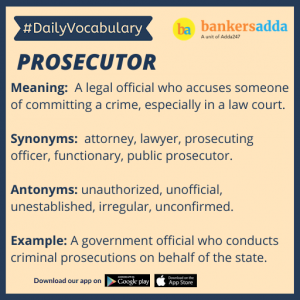 Impeachment (noun) : दोषारोपण
Meaning: a charge of treason or another crime against the state.
Synonyms: accuse, arraign, criticize, discredit, indict
Example: She will be in a state of mind to impeach the justice of the Republic.

Jeopardize (verb) : ख़तरे में डालना
Meaning: put (someone or something) into a situation in which there is a danger of loss, harm, or failure.
Synonyms: imperil, threaten, chance, gamble
Antonyms: guard,protect, save, design
Example: By a word he could have done it, yet he feared lest that word must jeopardize his brother.

Magnanimous (adjective) : उदार
Meaning: generous or forgiving, especially towards a rival or less powerful person.
Synonyms: benevolent, munificent, bountiful, philanthropic, chivalrous
Antonyms: stingy, selfish, uncharitable
Example: Because she was kind and generous, the magnanimous queen was loved by all.