A New concept of Descriptive Paper has been included in the pattern of Syndicate Bank PO Examination. Descriptive Test of English Language will examine one’s writing skills, understanding, analyzing and summarising skills. Apart from this, this test is also aimed at testing your knowledge of language and General Awareness. Letter writing is an essential part of Descriptive Writing. While writing a letter one should keep in mind that the letter should convey the message you want to carry in a way that no further communication is required in future. The second thing to be kept in mind is the word limit that is usually mentioned in the question itself.

Two types of letters are generally asked in the descriptive paper of competitive exams.
1. Formal letters: Letters written to a bank manager, a company, government officials, editor of a newspaper, member of a political party, business partner, employee, etc.
2. Informal letters: Letters written to a relative, parents, brother or sister, a friend, a teacher/mentor (Thanksgiving).

Date and Address: The writer should mention his/her own address in the letter they are writing. It should be written on the right-hand corner of the page. After the address, leave a line and write the date. The date shows when the letter was written.
Greetings or Salutation: The most common way to start off an informal letter is with a ‘dear’. Since this letter is meant for your friends or family, there is no need to greet them as ‘Sir’ or ‘Madam’. Put the name after that and then put a comma. e.g “Dear Shikha,”.

Text or Body: While writing the content of the letter, keep in mind the following:

In our effort to provide you all with the latest topics with solved examples and practice exercise set for descriptive writing we bring you A Guide to Descriptive Writing eBook that will prepare you to tackle the questions asked in Descriptive Paper of Syndicate Bank PO Examination with poise. You can get the Descriptive Writing ebook and Descriptive English Video Tutorial from store.adda247. 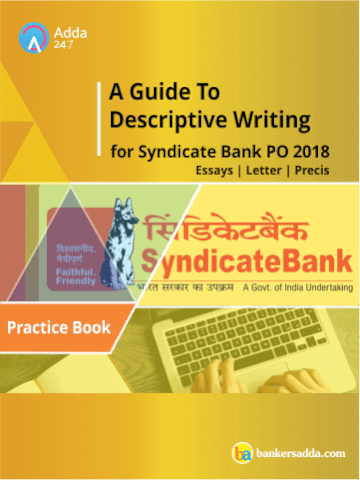