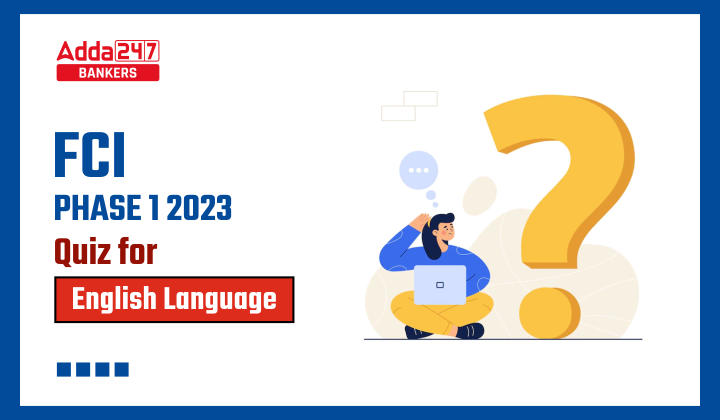 Directions (1-8): In each of the following questions, a sentence is given with a blank. There are five phrasal verbs given below each sentence, one out of which can be used in the blank to form a meaningful sentence. Choose the most appropriate idiom among the five options that makes the sentence contextually meaningful.

Q6. The Passenger Rail Agency of South Africa seeks to _____________ illegal conduct endangering passengers at its train stations.
(a) Fill out
(b) Ease off
(c) Drop out
(d) Dress up
(e) Clamp down on

Directions (9-15): In the following questions, a word is given in bold followed by three sentences. Choose the appropriate option mentioning the sentence(s) that uses the highlighted word in a grammatically correct and contextually meaningful manner.

Q9. Undaunted
(I) British Prime Minister Boris Johnson said he wanted a Brexit deal and that he was undaunted by attempts by parliament to block a no-deal exit.
(II) The novel has a ready audience in its large number of readers but also baggage of undaunted.
(III) In the film, Theodore’s mother points at a withering leaf in a undaunted and tells him that the artist is trying to communicate something, perhaps about morality.
(a) Only (I)
(b) Only (II)
(c) Only (III)
(d) Both (I) and (II)
(e) None of these

Q10. Appease
(I) The independent nation-states have all imagined themselves to be the inheritors, in the high Himalayas, of the geopolitical appease of their colonial predecessors.
(II) Appease your ancestors by availing IRCTC’s Gaya Tarpan Package with Varanasi Darshan.
(III) There is a long, complex and surprisingly unpredictable history to the appeasement of Pax Britannica’s border lines along India’s northern mountains.
(a) Only (I)
(b) Only (II)
(c) Only (III)
(d) Both (I) and (II)
(e) None of these

Q11. Genuflect
(I) Naturalization requires one to abjure genuflect to a foreign country, but America allows dual citizenship.
(II) Many of the attendees at the rally would have taken the genuflect of allegiance to become U.S. citizens
(III) Catholics genuflect to the tabernacle because it holds the Real Presence of Jesus Christ, their Lord, and king.
(a) Only (I)
(b) Only (II)
(c) Only (III)
(d) Both (I) and (II)
(e) None of these

Q12. Impeachment
(I) She served as a Democratic staff member for the panel during the impeachment investigation of President Richard M. Nixon
(II) The House Judiciary Committee has begun an inquiry to determine whether to recommend the impeachment of President Trump.
(III) The government’s statistical machinery has begun work on revising the indices that impeachment the trends in consumer prices experienced in rural India.
(a) Only (I)
(b) Only (II)
(c) Only (III)
(d) Both (I) and (II)
(e) None of these

Q13. Clout
(I) The Centre is geared up to notify updated MGNREGA wages in the clout fiscal year itself rather than wait for the onset of 2020-2021.
(II) EU finance ecolabels face delays as states seek more clout over greenwashing.
(III) Republicans in the state are trying to put up a challenge to the clout of the Latino-dominated union
(a) Both (II) and (III)
(b) Both (III) and (I)
(c) Only (III)
(d) Both (I) and (II)
(e) None of these

Q14. Dither
(I) The global economy risked entering a new, lasting low-growth phase if governments continued to dither over how to respond.
(II) The global dither that regulated trade is gone and we are in a new era of less certain, more bilateral and sometimes assertive trade relations
(III) Julian Fellowes returns to form with a cinematic event that will put fans in a royal dither while also providing the farewell they demanded.
(a) Both (II) and (III)
(b) Both (III) and (I)
(c) Only (III)
(d) Both (I) and (II)
(e) None of these

Q15. Delineate
(I) America has a fraught history of delineate with suspected disloyalty among its people.
(II) Adulation and delineated in the U.S. will amplify Mr. Modi’s support in India.
(III) The committee had delineated the map containing the boundary of Chilika where no coastal aquaculture was permissible.
(a) Both (II) and (III)
(b) Both (III) and (I)
(c) Only (III)
(d) Both (I) and (II)
(e) None of these

S4. Ans. (a)
Sol. ‘Brush up on’ means ‘to improve, refresh one’s knowledge of something’

S9. Ans. (a)
Sol. The term ‘undaunted’ means ‘not intimidated or discouraged by difficulty, danger, or disappointment’.

S10. Ans. (b)
Sol. The term ‘appease’ means ‘assuage or satisfy (a demand or a feeling); gratify, satisfy, fulfil’ or ‘pacify or placate (someone) by acceding to their demands’.

S11. Ans. (c)
Sol. The term ‘genuflect’ means ‘lower one’s body briefly by bending one knee to the ground, typically in worship or as a sign of respect; show deference or servility.’

S12. Ans. (d)
Sol. The term ‘impeachment’ means ‘the action of calling into question the integrity or validity of something’.

S13. Ans. (a)
Sol. The term ‘clout’ means ‘influence or power, especially in politics or business.

S15. Ans. (c)
Sol. The term ‘delineate’ means ‘describe or portray (something) precisely’ or ‘indicate the exact position of (a border or boundary)’.