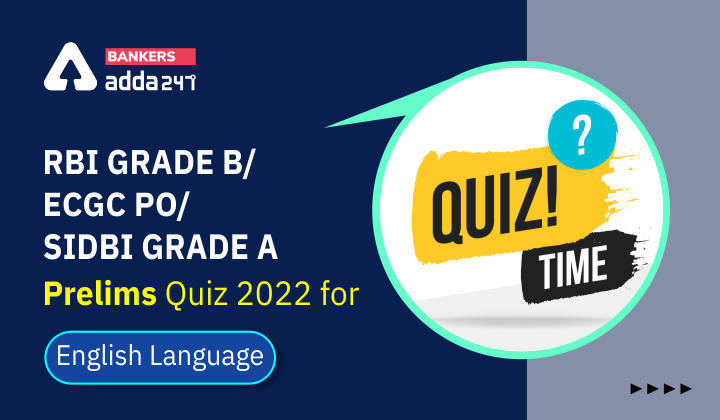 Directions (1-5): There has been a word omitted from the following sentences which prevents the particular sentence from becoming meaningful. Choose the option which contains the correct word to be placed in the filler. If no word is likely to fit in the sentence, then choose (e) none of these are your answer.

Q1. The Australian authorities asked thousands of people to ________________ their homes after torrential rain caused flash floods along the country’s east coast.
(a) entangle
(b) quench
(c) evacuate
(d) deplore
(e) none of these

Q3. Union Education Minister Dharmendra Pradhan on Wednesday said there is a need to prepare the youth of the country to become job creators rather than job _______________.
(a) hedonists
(b) antithesis
(c) visitors
(d) seekers
(e) none of these

Q5. The construction of India’s first underwater tunnel in Kolkata under the Hooghly River that will connect Howrah and Kolkata through metro will be made fully __________________ by 2023.
(a) geriatric
(b) pitiable
(c) functional
(d) tentative
(e) none of these

Directions (6-10): In each of the questions given below four words are given in bold. These four words may or may not be in their correct position. The sentence is then followed by options with the correct combination of words that should replace each other in order to make the sentence grammatically and contextually correct. Find the correct combination of the words that replace each other. If the sentence is correct as it is, then select option ‘No correction required’ as your choice.

Directions (11-15): Certain words are highlighted in the following sentences. It is possible that one of them has incorrect spelling. Select the word which has been incorrectly spelled. If all of them are correct, choose (e) All are correct.

Q11. Extrasensory perception (ESP) is an unproven paranormale phenomenon in which people allegedly receive information about, or exert control over, their environment in ways that don’t use the five senses.
(a) paranormale
(b) receive
(c) exert
(d) environment
(e) All are correct

Q12. At the mercy of natural selection since the dawn of life, our ancesters adapted, mated and died, passing on tiny genetic mutations that eventually made humans what we are today.
(a) mercy
(b) dawn
(c) ancesters
(d) mutations
(e) All are correct

Q14. A scientific theory is a structured explanation to explain a group of facts or phenomena in the natural world that often incorporates a scientific hypothesis and scientific laws.
(a) scientific
(b) phenomena
(c) incorporates
(d) hypothesis
(e) All are correct

S1. Ans (c)
Sol. The appropriate word that will be used to fill the blank is evacuate and it means remove (someone) from a place of danger to a safer place.
Entangle- cause to become twisted together with or caught in.
Quench- satisfy (one’s thirst) by drinking.
Deplore- feel or express strong disapproval of (something).

S2. Ans (a)
Sol. The appropriate word that will be used to fill the blank is fuel and it means to increase a feeling or a type of behaviour or make it stronger.
Unveil- to make visible; to reveal.
Expend- to use up (as in energy or money).
Persecute- subject (someone) to hostility and ill-treatment, especially because of their race or political or religious beliefs.

S3. Ans (d)
Sol. The appropriate word that will be used to fill the blank is seekers and it means a person who is attempting to find or obtain something.
Hedonist- person who acts in pursuit of pleasure.
Antithesis- the exact opposite of someone, something, or some idea.
Visitors- a person visiting someone or somewhere, especially socially or as a tourist.

S4. Ans (b)
Sol. The appropriate word that will be used to fill the blank is poignant and it means evoking a keen sense of sadness or regret.
Malleable- capable of being moulded or changed.
Pragmatic- practical, useful.
Vital- urgently necessary.

S5. Ans (c)
Sol. The appropriate word that will be used to fill the blank is functional and it means relating to the way in which something works or operates, or relating to how useful it is.
Geriatric- relating to old people, especially with regard to their healthcare.
Pitiable- deserving pity.
Tentative- not yet finalized.

S6. Ans (e)
Sol. There is no correction required in the mentioned sentence. All the words are in their right positions.

S7. Ans (d)
Sol. Here, 1-4 i.e., ‘Assembly – wake’ will be replaced to make the sentence grammatically and contextually correct.
The sentence thus formed is: The UN General Assembly (4) will vote Thursday on a draft resolution (2) seeking to suspend Russia from the UN Human Rights Council, a move initiated (3) by the US in the wake (1) of the mass killings in Ukraine’s Bucha.

S8. Ans (c)
Sol. Here, 1-4 (stress – health) and 2-3 (disabilities- collaboration) will be replaced to make the sentence grammatically and contextually correct.
The sentence thus formed is: After check-ups held by Bihar health (4) department organised in collaboration (3) with NGOs, over 80% of the children with autism, cerebral palsy, and other disabilities (2) have been found to be under stress (1) and depression.

S9. Ans (a)
Sol. Here, 1-2 i.e., ‘Prime-President’ will be replaced to make the sentence grammatically and contextually correct.
The sentence thus formed is: Indian President (2) Ram Nath Kovind and Dutch Prime (1) Minister Mark Rutte discussed ways of further strengthening the relationship (3) between the two countries at a lunch hosted (4) by the PM.

S10. Ans (b)
Sol. Here, 4-2 i.e., ‘submitted – crown’ will be replaced to make the sentence grammatically and contextually correct.
The sentence thus formed is: As the political crisis (1) in the country intensifies, Kuwait’s government submitted (4) their resignation (3) to the crown (2) prince on Tuesday.

S14. Ans (e)
Sol. All of the highlighted words are correctly spelled.